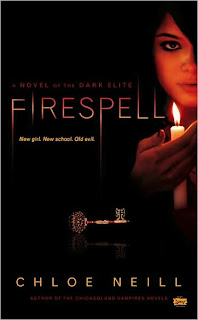 Summary:
"As the new girl at St. Sophia's Boarding School, Lily Parker thinks her classmates are the most monstrous things she'll ever have to face - but oh, how wrong she is.

When Lily's parents decide to send her away to a fancy boarding school in Chicago, she is not happy. Lily's classmates are the ultrarich brat-pack type - and if that isn't enough, she's hearing and seeing bizarre things on St. Sophia's creepy campus.

The only thing keeping her sane is her roommate, Scout, but even Scout's a little weird - she keeps disappearing late at night. When a prank leaves Lily trapped in the catacombs beneath the school, Lily finds Scout, who's running from a real-life monster. Scout is part of a splinter group of rebel teens who protect Chicago from demons, vamps, and the gone-to-the-dark-side magic users called Reapers. She lets Lily in on her secret, even though Lily has no powers of her own... or at least none she's discovered yet."
_____________________________________________
First Lines:

Before I picked up this book, I had read several advanced reviews that said it was amazing. I'm glad I listened to them and finally read it. They were so right! This book was wonderful!

One thing I really loved about this book was the dialog. There was something about the way the characters played off of on another that reminded me a lot of that tv show Gilmore Girls a few years back. It was fast, funny, and they just worked so well with each other. That really goes for almost all of the characters - they are all wonderfully written. It was also really fun to get into their new friendship and how things progress. Doesn't everyone want a person to declare them friends on their first day of a new school? That's just really cool and the characters have a lot of depth to them. There is definitely romance, but it doesn't smack you in the face. It's just the right amount. *applause*

I thought the concept was really fun - not to mention in a cool setting. There's something about boarding schools that is so exotic. I know I love the idea of them :). Not to mention the urban fantasy aspect that's used in this story - nothing better than a spooky boarding school! It's just really cool and the descriptions are wonderful.

Mixing in the whole mystery aspect with the urban fantasy made this book a bit more deep than I was expecting. There are a lot of questions to be answered in the end, but some are left hanging a little bit. But i know there's another book on the horizon (like, January 2011), so I feel like I can wait for my answers. I am excited for the next book though because this one was so well done.

I'm definitely recommending this book to anyone loving paranormal stories - even when they're looking for romance. Fans of the Kelley Armstrong series will find this one interesting. But so will fans of vampire/werewolf stories. It's great for everyone! :) This one also counts for my Debut Author Challenge - even though she has written one series for adults. So maybe check those out to see her other stuff! Here's her website.
_____________________________________________
Other Blog Reviews: