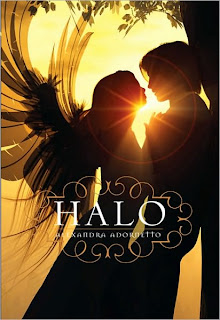 Summary:
"Three angels are sent down to bring good to the world: Gabriel, the warrior; Ivy, the healer; ans Bethany, a teenage girl who is the least experienced of the trio. But she is the most human, and when she is romantically drawn to a mortal boy, the angels fear she will not be strong enough to save anyone - especially herself - from the Dark Forces.

Is love a great-enough power against evil?

I'm going to be spending a big portion of this review trying not to gush. Because I absolutely loved this book. Absolutely. Loved. It.

First of all, I know it's a big book. I mean 484 pages, right? Well, here's the thing... This book took me a little while to read (almost a week!!), but it was mostly because I didn't want to rush it. There was something so meaty and wonderful about this story that I didn't want to let it go too quickly. It's one of those stories you want to live in... feel what they feel... all of that. It's just a beautifully written story.

A main portion of the book is definitely the "paranormal romance" bits. There's something very different about this romance. Pardon the term, but it's just very virgin. I don't mean that in a gross way... I mean it in a "the love is so pure and trusting and hopeful that you never feel put off by it." Does that make sense? I do think there are times that I just wanted to strangle the girl for being soooo enthralled, but considering the background it really works.

You can feel the moment that the story takes a turn for the adventure of the darkness... mostly because the author almost spells it out for you. "Don't look now, evil's 'a' comin!" Not what she wrote, but it's close :). But that didn't bother me at all, because it was a perfect point in the book to get more stirring up of the action.

Now, I don't know if I loved this story because of my religious background or not, but I really wanted a lot of the angel stuff to be true. To be how it is outside of this book. Who knows though - it may be. I want to say that I think everyone will fall in love with this book like I have, but I'm thinking it might be a little thinner on the audience. I do hope everyone gives it a try though. Not to mention the beautiful cover.

I do have to say that it was refreshing to have a totally different type of protagonist. There have been a few books lately that are the "fallen angel" stories (which is good and well and I love some of them), but it's really nice to have a character that only knows good and light and expects the best from people. I think the naivete would drive me crazy on any other type of character, but being an angel really allows the character to have that sort of personality. I was rooting for her the whole way through.

Again, I plan on recommending this to tons of people - hopefully even if they're not into the angel thing, they can get into the romance thing. I loved this book and I really hope others love it as well. I'm excited to read the next two books when they come out - and I have to say that this first book doesn't leave you on a huge cliffhanger. It does a great job wrapping things up for you, but keeping you wanting more and wondering what the next step is going to be. So don't worry about not having the next books yet.

YA Addict
Chick Loves Lit
The Tales Compendium
The Fiction Enthusiast
I hope to see lots more reviews of this one when it hits shelves!

Oh, I want to read this book. Sounds lovely.

*sigh* didn't know it was so long though - I'm a bit of on a reading slump, so long books are a bit of a challenge just now, but maybe by the time it's released I'll be better.

thanks for the review! i'm really looking forward to reading this one. something about it seems so innocent and chaste, yet just as mind-blowing as the other romances out there

I didn't realize I had a nemesis! If Pirate vs Ninja is to be believed. I've been wanting to read this book! And am a new follower so I wanted to poke my head in and say hi.