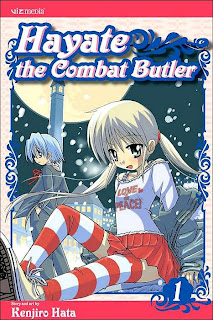 Summary:
(Volume 1)
"Since the tender age of nine, Hayate Ayasaki has busted his behind at various part-time jobs to support his degenerate gambler parents. And how do they repay their son's selfless generosity? By selling his organs to the yakuza to cover their debts! But fate throws Hayate a bone... sort of.

Hardworking Hayate has a plan to pay back the yakuyza - who are the legal owners of his body parts: he'll kidnap someone and ransom them for a mountain of money! But things get trickywhen his would-be kidnappee - who as luck would have it is the daughter of a mind-bogglingly wealthy family - mistakes Hayate's actions for a confession of love, and subsequently hires him to be her personal servant. At least his employment future is secure, or so he thinks..."
______________________________________ 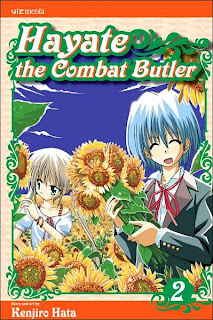 "Hayate's new career as a live-in butler for the mega-moneyed Sanzenin family is in full swing, but this job requires more than just mental fortitude and brute strength - he needs to be entertaining too. Whether it's standing up to fire-spewing robots or protecting his mistress's millions from her tycoon grandfather, Hayate must remain calm, composed, and hilarious at all times. the question now is whether Hayate will actually live long enough to pay off his debts... and things aren't looking too good!"

So... there's two reasons I decided to read these books. One being that I didn't have enough room on my shelves, so I opted to take them out instead. The second is that I need to read more manga to make sure I'm up on what my kids are reading. And that's manga. No doubt about it. Honestly, this one might not be all that popular righ tnow - as I was able to get volumes one and two in my first shot. That's not always a good sign :).

Anyway, so I've read a few manga in the past. I'm not counting any of those that are novel-to-manga though... I'm meaning ones that originated somewhere else (Japan, mostly) and have been translated into English. But I'm not sure that I've read enough to really have a strong point of view when it comes to this particular manga. So take anything I say with a grain of salt.

First of all, I think the story is a lot of fun. I mean, the whole parents selling your organs to pay off debts thing is pretty funny - and there's a lot that can be done with that. This story has our main character Hayate running from them and looking for ways to pay back the debts. I thought it was very humorous that his first thought was to kidnap someone... not rob a bank or something :). Maybe that's a westernized idea.

I also loved all of the misunderstandings and drama that followed. It seems like a great story for anyone to get into - guys, girls, anyone. There's plenty of action and there are a few romantic spots as well. They really tried to cover all of the bases.

Now, there are a few things that kinda threw me off (and I'm not sure if this is a complaint of manga in general or this particular one). One of those is that it was almost like the characters were acting out a play - because of all the asides that were like, "I thought this was a boy manga!" Like they were only telling the story and showing you what happened... instead of it just being like a novel. Another thing had to do with the art - I really loved the art. I did. Now, I get confused sometimes about who the characters are. Especially in the second book where there are a lot more new ones. I just had a hard time keeping them straight (especially when Hayate looks so much like a girl sometimes).

Anime News Network
My Anime List
Anime-Planet
Shonen Sunday (I think you can read it from here)
Mainichi Anime Yume
Er... okay, so a lot of these talk about the anime instead of the manga. I haven't seen it, but it seems like it might be cool. Oh, and there are other reviews of the books, but they all seem to be later volumes. So, check those out. :)