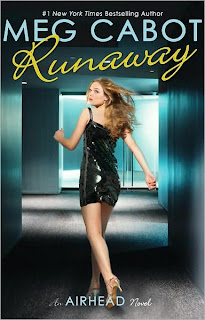 Title: Runaway (Airhead #3)
Author: Meg Cabot
ISBN: 9780545040600
Publisher: Point
Page #: 310
Source: From my library
Summary:
"Em Watts is on the run.
She's on the run from school, from work, from her family, from her friends, from herself.
With everyone she loves furious with her for something she can't explain, and nothing but the live Stark Angel fashion show on New Year's Eve to look forward to, Em's reached the end of her rope... what's the point of even going on?
But when she discovers the truth about Nikki's secret, she knows there's only one person she can turn to.
Will Christopher be able to put aside his personal feelings and help her expose her employer to the world? Is it even fair to get Christopher involved - since if he agrees, there's every chance that Stark Enterprises will try to have them both killed - this time, permanently?
Maybe it would be better to keep on running."
___________________________________________
First Lines:
"So according to the tabloids, I'm on a secret love getaway (not so secret anymore now, though, is it? Thank you Us Weekly) with Brandon Stark, the only son and sole heir of billionaire Robert Stark, currently the fourth-richest person in the world, after Bill Gates, Warren Buffett, and Ingvar Kamprad (who founded IKEA, in case you didn't know)."
Page 1
___________________________________________
Review:
Well, I've been trolling around Meg Cabot's website trying to figure out of Runaway is the last book in this series or not. She has a pretty cool site, by the way... but I couldn't find anything about next books. So, I guess I'll talk about this one like it is.

This is the third book in the Airhead series - a story of girls who switch their brains into each others bodies. Actually, that doesn't cover it at all. It's more like, evil company has plot to take over the world and starts with attempting to kill their star (because she knows too much) and have someone else's brain put into her body. Ta da! Sorta. It's a lot of fun and there are tons of twists and turns.

If you haven't read the first two books, I'm not sure if you wanna read the rest of the review. I would say that you need to go find those, though. They're definitely worth picking up. Meg Cabot is an amazing author and you would benefit from reading any of her stories.

Now, the whole story line in this book is a bit fuzzy at first. It does a little bit of recapping, but I was having a hard time keeping interested for the first few chapters. I think it's because I was trying to remember who was who (some of the characters were introduced right at the end of the last book) and what their personalities were.

But once I got back into the swing of the story, I loved the trip it took me on. There's a whole twist in this one that shows another side to the Stark company and it's fairly shocking. I mean, if this happened in real life... I can't even imagine. But it made for an awesome page turner.

One of the reasons I question whether this is the last book or not is because of all the wrapping up that takes place in the last couple of chapters. It's almost a bit rushed. A little like there were loose ends that needed to be tied up - and fast. It also gave a little bit of the "where are they now" at the end. That gave the book a very final feel. I'm not sure if that's what was intended, but that's how it felt.

I would definitely read another book in this series if she wrote one. It's a fun concept and I think there's still more that can be done with it.
PS... does it bother anyone else that the story line from that tv show Drop Dead Diva is almost exactly like the Airhead story? Except opposite. It's very irritating to me. Sorry. Tiny rant over.
___________________________________________
Other Blog Reviews:
Presenting Lenore
Bibliophilic Book Blog
The Story Siren
GreenBeanTeenQueen
Steph Su Reads
Stiletto Storytime