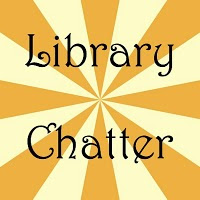 Sometime last week, I mentioned starting some posts that are Library related - as in some of the things that we Librarians do every day and would love to share. I know I'm consumed all day every day with book lists, programs, crafts, and so on... So perhaps sharing some of those will keep me blogging more often and about things I care about (besides books and reviewing them and all that).
Now, I know the image I made is really, really basic. But I'd be happy to change it if someone has wonderful button knowledge. On to my first bit of Library Chatter. What better way to start this off than a craft I presented yesterday:
Snow Globe Craft Project
Grades 7-12
I had seen this project online a few times and figured it wouldn't be too difficult to do with my teens. Though, it wasn't exactly simple, but they had a fun time making a mess. :). 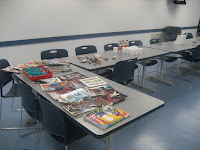 You start with jars - any size will do, I think. We used 12 ounce jars that I ordered from SKS Bottle & Packaging. As long as the tops have a good seal on them, you should be fine.
The next step is to have things for the kids to either glue or float in their jars. I had a few things. If they wanted plastic bits, I had buttons, shells, and little army guys. There's also a way to float a picture in the jar that I offered as an option. I like the picture idea the best - most of my teens just combined them all and filled the jars completely with stuff :).
If you do choose to float a picture, be sure you have enough packing tape for the kids to "laminate" the pictures. Speaking of pictures, I just gave them old weeded comic books and old magazines. I had a lot of takers on Spider Man. hah. You do have to make sure that the picture isn't too small - otherwise it will just float to the top and stay there.
Anyway, once they've fixed up the inside of the jar, it's time for the water and glitter. Make sure you fill it with enough water that you don't have a huge air bubble when you finish (though you can always add more later). Then you have to put corn syrup in each jar. This is to keep the glitter from sticking together and to give it the "snow globe consistency." Don't use too much, though, because it will make the water cloudy. (Science Lesson anyone?) 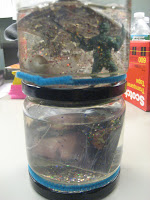 In terms of glitter, I think the solid colors work best (instead of the multi colored stuff). I would suggest not putting in too much at first - or they will just have to dump the water and start over. The glitter can get a bit overpowering. You can also have other floaty bits. Whatever you've got.
Once they closed it up, many of my kids decided to decorate the outside of their jars. Pipe Cleaners, buttons, googly eyes... whatever you've got. It's a craft explosion! :)
I had a few teens who needed help with ideas, but other than that it was a pretty self sufficient project. We did have hands on deck to help with the water and corn syrup part. I would recommend the project for other libraries if you have the manpower - and if you're looking for a fun time instead of a gorgeous outcome :).
Here are a few of my sources for knowing what to get and how to do the project:
Tipnut
All Kids Network
Teaching Resource Center
Have you ever tried to make a snow globe before? How did it turn out?

It looks like you had fun! I can only imagine the mess. I'd have glitter everywhere. Great post!

Love the snow globe idea! I have a ton of younger kids in my reading program so my crafts tend to be a little more simple. But I'm going to try the snow globe with my daughter at home.
Thanks for the post!

Great idea! I've never even though about making my own snow globe - so creative.