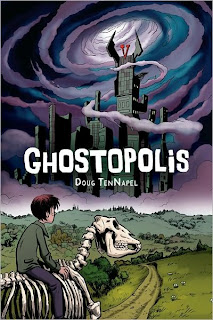 Summary:
"Garth Hale is as good as dead...
The only problem is he's still alive.

When Garth Hale is accidentally zapped into the ghost world by Frank Gallows, a washed-up ghost wrangler, he discovers that he has special powers. Soon he finds himself on the run from the evil ruler of Ghostopolis, who wants to use Garth's newfound abilities to tighten his grip on the spirit world. After Garth meets Cecil, his grandfather's ghost, the two search for a way to get Garth back home, nearly losing hope until Frank Gallows shows up to fix his mistake."
___________________________________________
First Lines:

I've enjoyed getting into graphic novels more and more lately. This one was a lot of fun, for sure. I think this one was built specifically for the middle school boy :). It's a story about a boy who accidentally gets sent into the afterlife and has to fight his way out. He finds out a lot of things about himself while he is there - a really good story. But it's perfectly gross and disgusting with all of the boy-love references - bugs, poop, stinks, just gross stuff.

You know, I really enjoyed this look at the afterlife - or Ghostopolis. It was all separated out into different sections... Mummyville, The Bone Kindom, and so on. It's a clever way of looking at it all and having a kingdom dynamic that works well in the story. It's also cool that they have the bad guy bugs roaming around. There's just a cool

I thought the art in this book was fantastic. As I've said before, I'm not an artist or anything and my opinion of the matter may not be all that informed, but I thought this book had some gorgeous images. They are all done in color, which may have altered my opinion a little bit. But with the darkness of this book, it almost doesn't make sense to do it in black and white.

One aspect of this story that I loved was the emphasis on family. You get a little bit of that in the beginning of the story. But as it goes along, you realize how important the family connections are to the overall course of the story. I mean, it only makes sense if you're traveling in the afterlife that you will come across some of your relatives. It's just played really well and leaves you with a sense of satisfaction.

You know, with the number of books out right now that are parts of trilogies or series' or whatever, it's really great to come across a book that has every little thing wrapped up. You leave this story feeling like you know how everything turned out. There's nothing left unfinished and most everything feels right. I'd say the author did a bang up job and I would definitely read more of his books.

Sounds very awesome, this novel.
Graphic novels are a hit or miss with me - I'm more used to manga, so sometimes I don't get the Western Graphic Novel - but this one sounds good