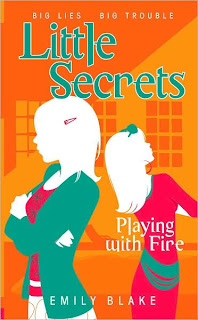 Summary:
"Her mother's in jail. Her best friend betrayed her.
Who can Alison trust?
Backstabber Kelly has the world at her feet.
Who will she step on next?
Sweet, handsome Chad seems like the perfect boyfriend.
What is he hiding?
Tough-as-nails Zoey is out for revenge.
IS she more vulnerable than she thinks?
Loyal friend. Bitter rival.
Which is the real Tom?

I was right that it was a mystery and that it was fast. I'm not sure if fun is the word I'd use to describe it. I mean, it was seriously drama filled... and you have lots of characters with crazy things going on with them... So you're never bored. Actually, I spent the first few chapters trying to figure out what kinda characters we were dealing with. I mean, you get the whole rich and privileged thing really quickly.

But then I realized that we were dealing with the mean girls. That made it kinda hard for me to feel sorry for any of them. I mean, their whole existence revolves around getting back at people or attempting to make someone's life horrible. Because of that, it took me a really long time to decide if I liked the main character, Alison, or not. I settled on neutral ground because of what happens throughout the story.

Perhaps it's because I didn't like many of the characters, but I'm not sure if I'm going to continue this series. I am, of course, completely curious about the next step in the story - as in, what in the world happens next. You're left on an absolute cliff hanger, so now I wanna know what happened. But it's going to be hard for me to pick this up because I've got so much other good stuff to read.

Now, if you're looking for a light, drama filled mystery... then this is the series for you. I think many people are going to like it and enjoy watching the drama of the elite class. I'm sorry this review is such a bummer, but I spent most of the book doing the "come on, come on" to find out what was going to happen - only to find out nothing. I dunno... maybe if I had nothing else to read, I would go for the second book. It's an older series, so there's a chance that it's fallen off the radar anyway.

ohho-kay then. I didn't see any reviews. Only the typical goodreads and librarything entries. Well, if you've read and have an opinion on this one, feel free to let me know.

Wow, I feel the same way about the unlikeable characters, and thought about whether ruining a person's life and holding grudges could really be so important to someone. I hated Kelly though, so Emily Blake did a good job of that, I guess. Every once in a while I read something random made by someone on the internet and figure I should leave a sign I was there. Bye!
-Caila (Ky-la)