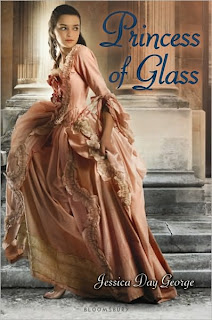 Summary:
"Having once been cursed to dance every night with her sisters, Princess Poppy has vowed never again to put on a pair of dancing slippers. Which is why she's reluctant to participate in the royal exchange program that her father and some of their neighbor kings have cooked up.

Life in far-off Breton isn't so bad, not when there's money to be won playing cards and a handsome prince promising friendship... and maybe something more. But when a hapless servant named Eleanora enters the picture and sets her sights on the prince, too, which girl will win his heart? And who is behind the magnificent gowns and slippers that the penniless Eleanora has been wearing to the balls? Only Princess Poppy can see through the magic that holds the rest of the kingdom in its spell. And having fought against one curse before, she's just the girl to take on another!

I have said this before, but I'll say it again: I am (and probably forever will be) a huge fan of Jessica Day George. I have read several of her YA novels and officially loved it all. I think all of it is the retold fairy tale - or retold myth. And every single one of them is done beautifully.

Princess of Glass is a companion to the earlier Princess of the Midnight Ball. The first one was the tale of the dancing princesses... this one is Cinderella. This book is told from several perspectives, but the main one is Princess Poppy from the first tale. She is the character that ties the two stories together, but has a whole new adventure and story to tell.

I was hoping for a little bit more action in the end - more of a ka-boom! But it really worked out well, so I wasn't too disappointed. This book is written so beautifully, it makes me wish I lived during that time. Well, sort of. But the whole concept of balls and suitors and dancing and more... it's just really enticing. Wouldn't it be great if that's all we had to worry about?! :)

If you're into historical fiction, I'd recommend this one to you as well. It's not really historical at all, but it has the feel of being set in a time period. It's not exactly accurate or anything (at least to my knowledge), but it's very much worth your time to read.

I've been handing Princess of the Midnight Ball to tons of my teens - and they've loved it, too. So you should all give it a try. I think you can read this one without reading the first one, but I'm recommending them both. Hopefully you won't be too confused if you don't.

Okay, so that's what this one is about. I haven't read the first one, but will get around to it. The way the summaries read, I thought Eleanor replaces Poppy and goes instead of her. See how confusing the summaries can be. I just don't know who are writing these book summaries. Anyway, I will definitely read this. I can't remember how many times I've written that today. I've got a lot to read! Thanks for stopping by my blog today. I like both of your blogs. I'm a transplanted Southerner too. I miss sweet tea!