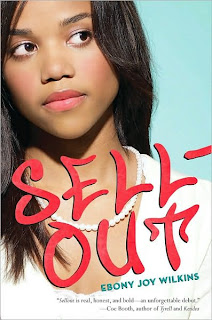 Summary:
"Being nearly the only African American in her suburban school doesn't bother NaTasha, but it troubles Tilly, her spitfire grandmother from Harlem. When Tilly decides that NaTasha needs to get back to her roots on her summer vacation instead of getting manicures and lattes at the mall, NaTasha is thrown into a world where everything is unfamiliar - and a little frightening.

During her stay, NaTasha volunteers at Amber's Place, a crisis center in the Bronx that helps troubled girls straighten out their lives. These girls aren't anything like NaTasha or the girls back home. They are tough, their lives laced with danger. Just when NaTasha is ready to call it quits, she makes a friend and realizes these girls who wield their secrets like knives aren't the only ones struggling to find the right path. For the first time in her life, NaTasha has questions, like why she's in the ballet troupe when she'd rather be playing volleyball and why in her all-white neighborhood back home she's never had a boyfriend. Then NaTasha meets two boys in Tilly's neighborhood who compete for her attention and maker her heart flutter. It's a summer that will change her life forever."
___________________________________________
First Lines:

I think living in NYC and working with teens who are... "underprivileged" for lack of a better word has made me jaded. I hate that word, actually, but I couldn't come up with anything better. There was a lot of this novel that I could easily compare with the teens I see every day. And there were a couple of times that I thought, "really? my teens don't talk like that." But that's probably because I work with them every day. And I could be completely wrong. Ahem... on to the review.

This is a story about a girl who lives in a white washed neighborhood and her grandmother worries about her knowing about where her family came from. So she spends a few weeks living and learning about Harlem and the Bronx. She's thrown into this crisis center where her grandmother works and finds herself flailing a bit.

It's mostly about self discovery and learning about difficult relationships. I think my favorite parts of this book are when NaTasha is hanging out with the boys in the neighborhood. Just because they felt to easy and normal. The parts of her in the girls crisis center made me really nervous - mostly because I know girls like that and they really worry me at times. So, because I could put a face and an attitude to these girls, it made reading this book very real to me.

I think those that enjoy Coe Booth's books would definitely love this one. It's told from an "outsider's" perspective, so it gives a whole other light to the issues the girls are facing. NaTasha isn't living with them, she doesn't see the things they go through... she hears about them in the group sharing time. It's a real awakening for her in realizing how life isn't all shopping and fun for some people.

It's a real picture of what life can be like in the inner city. Another word I hate. But that's what it is... and it's done well. I think it will also resonate for people who don't actively live in a place like this. It gives you a snapshot of a new lifestyle... a new perspective on the world.

I will be recommending this book, for sure. I think it's the authors first published book and I look forward to more from her. Check out her website for more updates and information about her.

Dreaming in Books
Bookish Blather
Kiss the Book
More people should read this book, so get out there and find it! I have it at my library :).