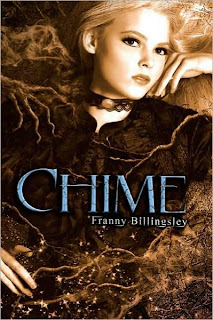 Summary:
"Briony has a secret. Her secret killed her stepmother, destroyed her sister Rose's mind, and threatens all the children in the Swampsea. She yearns to be rid of her secret, but risks being hanged if she tells a soul; hanging's what they do to the Old Ones in the Swampsea - not the Boggy Mun or the Dead Hand, but Dark Muses, witches and the like.

When Eldric arrives - Eldric with his golden mane and lion eyes and electric energy - he refuses to believe anything dark about Briony. But he wonders what's been buried beneath Briony's memory and guilt, hidden in Rose's mangled thoughts, and whispered about by the Old Ones. And Briony wonders how Eldric can make her want to cry, especially when everyone knows, witches can't cry.

Halfway through this book, I seriously thought I was going to have to give a bad review. Well, not bad... but not great. But the ending really brought it all together for me and things truly started to fall into place. Pretty sure I picked up this book because of the cover... sue me. :)

This book is about a girl living in a community on the edge of a swamp. From what I could tell, it was set in a time before cars were prevalent and railroad tracks were just being laid out. But that also may be a little bit because of the back-woods nature of the area in the story. So it's about a girl who is a twin, but she is convinced that she's a witch. She's able to see and talk to all of the creatures that live in the swamp. Because she is a witch, she has done terrible things to the people closest to her. She lives realizing that she will be hanged and just wants to get it all over with. Either that or ride the new train to London and never come back.

Let me just say that this book is seriously strange. There is some serious genius in there, but I had some trouble getting used to the flow of language and some of the characters. You aren't given a plain description of anyone, really. Maybe of her father, the local religious man. And some of the outer characters. But our main people are sort of a mystery throughout the first half of the book.

I spent a lot of the book confused. Really, I did. I understood the little things that happened. I got that there were these crazy creatures in the book. But things sort of jumped around and I wasn't really sure what was being described. Of course, this could have been one of the reasons this book seems so unique. There are a lot of things going on - a lot of characters as well - and it's hard to make sense of some things. They do start to come together in the end.

Honestly, I wasn't sure how the ending was going to be. There were several possibilities - and with the strangeness of the book, I figured anything could happen. I really thought it was the perfect ending to such an odd story. And it gave me a sense of how things would be in this town from then on. I almost would be interested in a second book set in this same world. I didn't think I would be saying that when I started it.

I brought this book home from the library yesterday but haven't gotten to it. It is getting fabulous reviews.