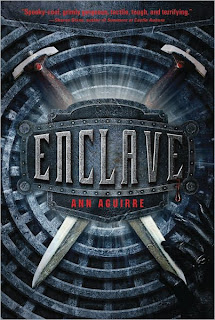 Summary:
"Deuce lives in an enclave, deep underground. Her friends are her family; her life revolves around training to become a Huntress, one of the elite cadres who protect the enclave.

Deuce is partnered with a mysterious Hunter named Fade, who is said to have lived in the surface world as a young boy. When she and Fade discover that the neighboring enclave has been decimated by the tunnel monsters - or Freaks - which seem to be growing more and more organized, the elders refuse to listen to warnings. And when Deuce and Fade are exiled from the enclave, the girl born in darkness must survive in daylight, in the ruins of a city whose population has dwindled to a few dangerous gangs. As the two are guided by Fade's long-ago memories, they face dangers, and feelings, unlike any they've ever known."
___________________________________________
First Lines: (Subject to change in final publication)

There are lots of things to love about this book and lots to compare it to other stories. It's a story about a girl who was born and raised in an underground community that survives each day on following the rules of the elders. Deuce is one of the Hunters in her community, so she goes out in the tunnels to search for caught meat and to fight the Freaks. In a couple of her trips out into the tunnels, she realizes that things aren't all as they seem. The elders seem to be keeping things from the citizens. Because of this, she is banished - along with her partner, Fade. She then has to learn how to survive under entirely different circumstances.

The Freaks, in my estimation, are zombies. That is never used. They are called Freaks, Eaters, and even Muties. The way they are treated in this book fully reminds me of The Forest of Hands and Teeth by Carrie Ryan. They are treated as the sole source of terror for each of the books. In Enclave, they are just kept at bay by death - they happily feed on whatever meat they can get their hands on. I don't know that I thought of them as zombies at first... just these mutated humans who have not adapted to the world in the story. It was well done, really.

Our main girl, Deuce, is basically a hardass. In her world, people hardly live to see 30 - so you have to make every year count. She trained to become a Huntress for her entire life. Finally she got the chance to go out and do what she's been trained for. She treats every situation like a threat and hardly ever lets her guard down. Those few times she does, bad things happen to her. She also keeps her friends at a distance - knowing that Hunters have short lifespans. Like I said, hardass.

Because she keeps people at such a distance, it comes as a surprise to her that her partner might be interested in keeping her safe and secure. And that he might even have real feelings for her. But that is all tested through deaths of friends and enemies. They work together seamlessly, so it makes sense that they want to keep each other safe. There is a tiny bit of romance in this book, but it's really out of desperation more than anything else.

Looking back on this book, I'm going to say I loved it. By the end of the story, I was truly rooting for all of the characters (and trying to see beyond some characteristics of a few of them). But let me tell you... this book is truly frightening. Of course, the fear of things that go bump in the dark is a big one for me. So of course it's scary! I really couldn't read it right before bed. That's another way it reminds me of Carrie Ryan's books.

Anyway, it stands on it's own very well... and I think I will be recommending it along. Those who are fans of the dystopian novels will definitely love this one. I was just looking on the author's website and realized there is a second book coming out sometime next year. Very exciting! I think this book stands well on it's own, but I can't wait to see where this story takes us. I'd definitely give this one a try if you're into frightening books - and zombies. :)
___________________________________________
Other Blog Reviews: