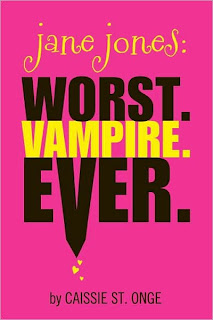 Summary:
"For Jane Jones, being a vampire is nothing like you read about in books. In fact, it kind of sucks. She's not beautiful. She's not rich. She doesn't 'sparkle.' She's just an average, slightly nerdy girl from an ordinary suburban family (who just happen to be vampires). Jane's from the wrong side of the tracks (not to mention stuck in the world's longest awkward phase), so she doesn't fit in with the cool vampire kids at school or with the human kids. To top it all off, she's battling an overprotective mom, a clique of high school mean girls (the kind who really do have fangs), and the most embarrassing allergy in the history of the undead: she's blood-intolerant.

So no one's more surprised than Jane when for the first time in her 'life,' things start to heat up (as much as they can for a walking corpse, anyway) with not one but two boys. Eli's a geeky but cute real-life boy in her history class, and Timothy is a beautiful, brooding bloodsucker who just might hold the key to a possible cure for vampirism. Facing an eternity of high school pressure and fumbling first dates or a mere lifetime together with Timothy, what's a ninety-something-year-old teen vampire to do?"
________________________________________
First Lines:

So, basically this is about a girl in high school who happens to be a vampire. There's some mean girl stuff, there's some cute boy stuff, and there's some nerdy boy-love going on. Not to mention that she's allergic to drinking blood - which complicates the whole thing and spurs on the mean girls. She also really wants to go back to being human... at whatever cost.

I have to be honest, it was really hard to get through the first 100 pages (aka half) of this book. Typically, I am able to suspend belief for vampire stories. There has to be some of that. But there were a few details about this one that made it seem weird to me. Like... she's over 90 years old and she still answers to her mom? And that she's the most awkward girl in the world? Don't you mature at all - even though your body doesn't? There was a short mention of the whole, "sucks you're stuck in a teenage mindset" thing... but I had a hard time with it. Not to mention that I just wanted to shake her most of the time.

Now, the second half of the book is a totally different story. There was love, intrigue, and a little adventure. You just have to slog your way through the beginning to get to the good stuff. You learn why her teacher has been acting strangely, how her family became the way it is, and what she hopes for the future.

One big universal thing about this book was family. She is always thinking about and worrying about her family. It comes full circle in the end, but it's definitely a running theme. Of course, if you're eternally with those people, I suppose they become the center of your world. I did enjoy the characters in her family. I wasn't much expecting a ten year old genius :).

The love interests kind of hit me as odd. The one organic relationship is with Eli - the human geek who is a little obsessed with Jane. But it's the kind of relationship that is kinda cute. Aww! Little nerds getting together. Perfect! The second guy, Timothy, is much more of a mystery to me. There's never much of an explanation why he really wants to be with Jane for the rest of their eternal lives. There's one shared interest, but it's taken too far too soon. I just wasn't so sure about that one.

All in all, it's a decent story. There are several things that I had to suspend my belief for (much more than normal), but I think there's a good story in the bones. Those readers who enjoy a humorous take on the whole vampire thing will probably get a kick out of this book. It's definitely the kind of story that doesn't take itself too seriously. So I'd recommend it on that front. I look forward to seeing what this author comes up with next!
________________________________________
Other Blog Reviews: