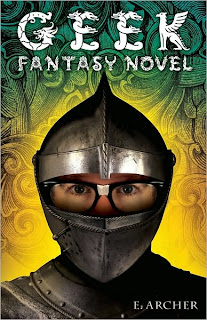 Summary:
"Be careful what you wish for. Really. Wishes are bad. Very bad.
They can get you trapped in a fantasy world full of killer bunny rabbits, evil aunts, and bothersome bacteria, for example.

But you already knew that, didn't you?
Ralph, alas, does not. He's been asked to spend the summer with his strange British relatives at their old manor house in order to set up their Wi-Fi network. But there's much more to it than that, of course. It's just that nobody told Ralph. He's a gamer, sure. But this game is much stranger - and funnier - than anything manufactured by Nintendo.

I'm not sure I knew what to expect from a book with a nerdy cover and a geeky premise. I'm just going to say that I didn't know there would be geek references that I didn't really get. But I suppose I'm okay with that.

This is the story of a boy who has recently learned that he has famous relatives in England. They invite him to stay for the summer and figure out their wi-fi situation. He agrees and doesn't realize he's signed on for the biggest adventure of his lifetime. His parents had always kept him from making wishes, but he soon finds out the reason. Wishes are dangerous!

If this book is nothing else, it's definitely clever. The cleverist of clever. I'm pretty sure every fantasy character in the history of fantasy makes an appearance. It's got bunny bombs, fairies, crazy witches, and lots of waking up in strange lands. While Ralph is staying with his cousins, he learns more about them each - and accidentally gets sucked in to each of their wishes. I think that's a pretty fun premise, don't you?

I think my favorite characters were the non-main ones. I loved the random fairies they hook up with. I loved the narrator (mostly for what you find out in the end of the book that I'm not going to give away). I loved that inanimate objects came to life and Ralph barely blinked an eyelash. Those were just the fun characters that kept this story going for me.

There is so much geeky humor, that I think just about anyone would like this story. People who are into all of the heavily geeky stuff might get more out of it than I did. I'm sure there were references to things I didn't get. But it's done well enough that I wasn't missing out. I think this one will be a fun book to recommend - mostly because of the subject. Geek humor. Can you really go wrong with that?!
__________________________________________
Other Blog Reviews: