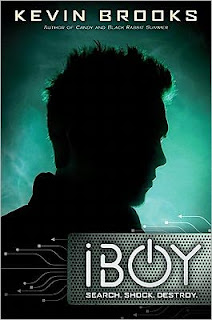 Summary:
"Before the attack, Tom Harvey was just an average teenager. But a head-on collision with high technology has turned him into an actualized App. Fragments of a shattered iPhone are embedded in his brain. And they're having an extraordinary effect on his every thought.

Because now Tom knows, sees, and can do more than any normal boy ever could.

But with his new powers comes a choice: To avenge Lucy, the girl he loves, will he hunt down the vicious gangsters who hurt her? Will he take the law into his own electric hands and exterminate them from the South London housing projects where, by fear and violence, they rule?

I've read a few of Kevin Brooks' novels in the past and I've always found them sort of strange. He has a certain way of telling a story that is very different. Even if I'm not sure I can put my finger on the difference. This story is no exception.

Our hero's name is Tom Harvey, but he soon begins calling himself iBoy. On his way to visit his friend July, someone calls his name from the thirtieth floor of a building and drops an iPhone on him. After weeks recovering, he starts to realize that his brain isn't working normally. Soon he realizes all of the capabilities - and all of the things he could do with them. Lucy was attacked that same night by a group of gangsters. Tom starts to give them trouble as iBoy - and he is soon labeled a vigilante.

It's an amazing story. And it's sort of written with little hints of truth - where you truly wonder if this is possible. I mean, they can't get all the pieces out of his brain without hurting him, so they fuse with his brain? Maybe. Then they start interacting with his brain and how his body functions? Hm. It's a very cool idea and I kinda wish it was possible. Of course, then it means there's a possibility of someone listening in to everything you do technologically - typing, calling, texting, etc.

I think the relationship between Lucy and Tom is the best part of this book. They are best friends in the beginning and the attacks on them almost pull them apart. But they find common ground and understand each other. There's something very organic about their friendship - it seems kinda similar to many friendships I've had in the past. I also love how things end up, but I'm not going to tell you what happens.

The most interesting part of this story for me was the setting. It's effectively the projects - Highrises that are low income families in London. And of course there's lots of gang activity. Tom has always been one to stand on the sidelines and not get involved. But when he realizes that the gangs are to blame for everything that happened, he starts to go after them in any way he can.

I think many people who love tech savvy stuff will like this book. There's something very cool about thinking what it would be like to have an iPhone in your head. Can you imagine the possibilities. So I definitely recommend it to those who can wrap their heads around that :). Now, I do caution you that there's a bit of gore and lots of mentions of rape. So I probably wouldn't recommend it to younger readers. It's a bit much, I think.