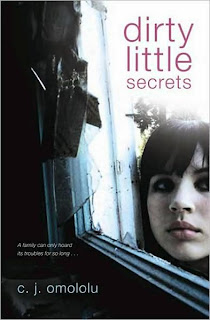 Summary:
"From the outside, Lucy's home looks normal. Inside the front door is where the secrets begin. Towering piles of newspapers and magazines. Bags of junk flooding every inch of open space. The rotting smell permeating the air. This is what she's kept from everyone - that her mother's compulsive hoarding has reduced their lives to garbage... literally.

With just two years until graduation, Lucy finally feels like a normal life is within her grasp. Her new best friend, Kaylie, and her longtime crush, Josh, make a future seem almost possible.

In the past few months, I've really gotten into the new tv show on A&E called Hoarders. It's such an intense show and really gives you a look into the lives of people with a problem hoarding and how it affects their lives. So when I saw this book was all about a family dealing with hoarding, I was really excited. It's just fascinating to me learning about this disorder and the people it hurts.

This book is such an emotional rollercoaster. You've got Lucy's hate towards her mother because of being blamed or judged about the state of the house, her guilt and sadness about her mother's death, her anger at her siblings for not being there (or not helping when she needs it), and her hope and happiness in finding a "normal" life away from her family. It's amazing how many emotions a person can feel in a matter of 24 hours.

At first it was a little difficult to get into Lucy's mindset - just because the decisions she makes aren't necessarily the ones I would make. But as you read along and get some of the backstory, you really start to feel her pain and her desperation. And you almost see the method in her mother's hoarding - or at least the excuses that are there and why things are the way they are.

This book is written wonderfully! I was pulled into the story immediately and it didn't let me go till I was tearing up at the ending. It's a well written book that tells a part of reality that is rarely discussed (at least until this book and the tv show have come out). I think it's important for people to understand it and this book gives wonderful insight to teens who might not otherwise get it - hence the teasing and stuff at school.

I really plan on putting this book in anyone's hands who are looking for issue driven books - because this one is a stunner. It's emotional (as I said before), but it's also hopeful and freeing almost. I'll definitely be recommending it. I really liked the cover too - it's very realistic without showing the extent of the problem. Very well thought out and the girl fits my image of her in my head very well.

I hope to see more from Omololu in the future! Her website is a fun place to look around - she's got a very active blog that I just followed and look forward to reading. I believe she counts for a debut author as well, so I'm adding her to my challenge list. I know she wrote a children's book before this one, but w000t for the YA debut!

Again, there are more reviews out there. Seems like lots of people love this one. So take a chance on it! :)
Read by Emily at 9:51 AM

This sounds like a very moving story. I watched one episode of Hoarders and it was very hard to watch. In this particular episode, a son and daughter are trying to get their mother's house cleaned up and the son talks about what it was like living there.

Thank you for your review! This is definitely a book I will be adding to my TBR list. By the way, here is an award for your blog.