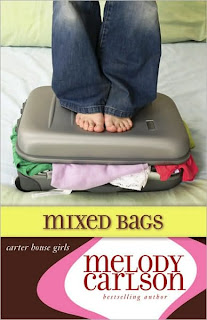 Summary:
"When her mom died, DJ had to move in with her grandmother, internationally famous '60s fashion model Katherine Carter. Now Mrs. Carter's opened a boarding home for young ladies, and DJ - who would rather wear her basketball team uniform than haute couture - is just sure they'll all be unbearable fashion snobs.

One by one, the girls arrive and begin to figure out how to fit into this new family, getting to know each other and forming friendships. There's a few aspiring divas and even a closet Christian. Before long, the Carter House girls are dating, fighting, laughing, shopping, sharing clothes, purses, shoes... and their deepest secrets. DJ may not turn into the perfect little lady her grandmother has in mind, but one thing's for certain - with all these new "sisters," her life will never be the same!"
______________________________________________
First Lines:

Well, we have another book whose first lines really don't give you the right feel of the book. Yes, the beginning was a little slow, but that sort of was the feeling throughout the whole book. I do know that this is the first of a fairly large series (I believe there are at least 6 or 7 right now, with more coming), so I'm trying to give it a little slack.

I didn't hate this book. But I didn't love it either. It was definitely a fast read (only 198 pages long!). I just think there was something about the way the characters spoke or acted that doesn't really jive with what I think of teens acting like - or what I know they act like. Perhaps in a perfect world they would be so exact... but I dunno.

There was also a really big emphasis on clothes and purses and shoes and stuff... almost to the point of being too much. I do realize that the story is about a fashion icon taking girls under her wing and teaching her ways, but it was a little over done. I don't know, it just made things feel a little less realistic in my mind.

Carlson is very big in the modern Christian fiction genre - and that's what this series is billed as. The whole first part of the story, you really didn't feel it. But in the end you're almost getting blindsided by it. I mean, the elements were there, but I wasn't expecting to be hit over the head with it for the last chapter. I'm not trying to complain about that - but the rest of the book isn't set up that way. It's shocking, almost!

I have had several girls looking for Christian fic, and I think this series is going to be perfect for them. I'll definitely be putting this book (and it's series) into their hands. Now, as for me, I don't think I'm going to be reading the rest of the series. I do have a wonder about what's going to happen to the rest of the girls, but it's almost too much for me.

Relz Reviewz
Seattle Pi
Novel Inspirations (Has the first chapter)
Sisters in the Savior
Read by Emily at 9:04 AM

I've only read one Melody Carlson book, but I felt like the Christian elements came in later in the book too. I also found the conversations between the teens not very realistic. But she is popular with my teen girls looking for Christian fiction and her books check out a lot! I would check out Jenny B Jones-her books have a lot of humor in them and I try to recommend them to my teens who have read through the Christian fiction section.

We have the Jenny B Jones series in Christian in our library. They're not as heavy with the Christian elements as the Melody Carlson books and I find the characters more realistic.

And I believe they have a Christian publisher, so I would shelve them in with other Christian fiction.

I haven't read any of Melody Carlson's YA fiction but I have read her books for adults. Teens who like Christian fiction might like her 86 Bloomburg Place series (it is about girls who are around college age).