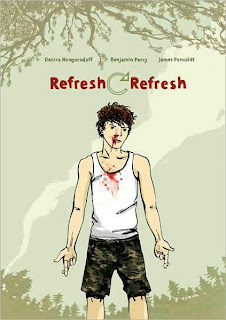 Summary:
"In a small town in rural Oregan, many husbands and fathers who enrolled as Marine Reservists have been shipped off to fight in the Iraq war. Left behind, three sons, boys on the verge of becoming men themselves, struggle to grow up fast enough to fill their fathers' shoes.

After typing up that summary from the book cover, I think the summary says a lot more than the book itself. I mean, there are things in the depth of the book, but you really get the entire story line from it.

I really find it awkward to review graphic novels because I'm definitely no expert. I have a coworker who really is. So really I'm not going to say anything about the art - except for the cover. It's a little... intense. I mean, I know the book is about boys who have had their fathers leave them for the war... but a bloody kid on the cover is very crazy-seeming.

But this story is becoming more and more of a reality these days. Kids left at home - waiting to hear from their dads. I think the title is clever - Refresh - as in, refreshing your browser to see if you have new messages. Very well done. And it's a very interesting story and told in a very real, stark way.

I would recommend this book to anyone into the more meaningful graphic novels. It's a very heavy story, but it's told simply and is easily appreciated. I would probably keep it to the older teens, but not necessarily - there's just a bit of fighting and bloody bits... so it might make a difference.