Of All the Stupid Things by Alexandra Diaz 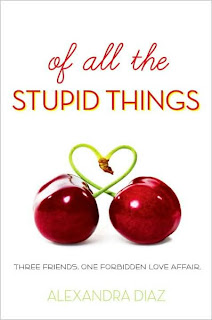 Summary:
"Tara, Pinkie, and Whitney Blaire have been friends forever... until one love affair tears them apart.

When a rumor starts circulating that Tara's boyfriend Brent has been sleeping with one of the guy cheerleaders, the innuendo doesn't just hurt Tara. It marks the beginning of the end for three lifelong friends. Tara's training for a marathon, but also runing from her fear of abandonment after being deserted by her father. Whitney Blaire seems to have everything, but an empty mansion and absentee parents leave this beauty looking for her own value in all the wrong places. And Pinkie has a compulsive need to mother everyone to make up for the mom she's never stopped missing.

This book was really a lot of fun. I enjoyed getting to know the three main girl characters - how their minds worked and how different they were from each other. This book is a great testament to friendships, for sure... and definitely relationships (and who it's okay to have relationships with).

The girls are a little cookie cutter. They each fit into their mold very well. But the three of them being friends, but falling out is something that we all have probably experienced through high school. I know I had friends that we just grew apart. It's nice to see a story written about girls who have had the same experiences - for whatever reason.

I would like to say one thing about the love interests in this story - you don't get much personality out of them. I mean, you know that the girls are into them... but it's almost like I have no idea what they see in them (possibly because we don't spend enough time getting into their conversations and such). And I find it interesting how the issue of lesbianism is dealt with in the story. On one hand it's handled a lot better than I would think might happen in real life... but on the other hand it's almost denied by some of the characters. I dunno. It's a weird handling of it, but probably a bit accurate. I'm not sure how true to reality those reactions are, but I'm not experiencing it... so I can't make a judgement there.

I really did enjoy this book. The characters were fun and I liked the flow of the story. I'll definitely be handing this book to girls looking for realistic fiction. Probably the older girls though, because there are a few scenes dealing with sexual stuff - nothing too graphic, but it's definitely heated.

All in all, a great debut book! I picked this one up to fulfill part of the challenge: