The Haunted by Jessica Verday 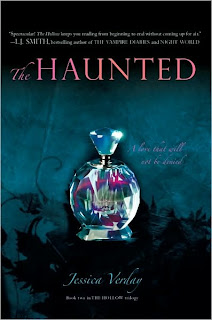 Summary:
"After months spent reclaiming her sanity and trying to forget the boy she fell in love with - the boy who must not exist, cannot exist, because she knows that he is dead - Abbey returns to Sleepy Hollow, ready to leave the ghosts of her past behind. She throws herself into her schoolwork, her perfume making, and her friendship with Ben, her cute and funny lab partner, who just might be her ticket to getting over Caspian once and for all.

"I was so lost when Kristen left. When she died. Then Caspian found me. I got to know him. Fell in love with him. He helped me deal with the fact that my best friend was never coming back. And when I found out that she'd been keeping so much hidden from me, he helped me try to understand.
But he had a secret too."
Page 1 (Preface)
______________________________________
Review:
I reviewed the first book of this trilogy here: The Hollow
One would think I picked up this story because Halloween is coming up - a romantic ghost story and all that. But it's honestly not the case. Luckily this second book in the series added just enough intrigue to the original story that I was really caught up in the book - excited to see what was going to happen next.

The story grows a lot in this book. There are new characters, new locations, new problems... just a lot more stuff going on. But I'm going to reiterate something I said in my review of the first book: I absolutely love Abbey's hobby of creating perfumes. There's just something so... tangible. Or maybe it's another sense that the readers ends up unconsciously using. Not to mention that you can buy them on the author's website! And... now I want one. Ahem.
After reading my review of the first book, I definitely enjoyed this second one a lot more. I remember spending a lot of time during the first book wondering where the story was going to go. Whether we would figure out any of the mysteries... and you didn't until the very end. The Haunted was much more complete feeling. Granted, there are some things unfinished in the end (but that's to be expected with a third book coming!), but you feel more satisfied at the end of the story.
The new characters in this book are deliciously evil and wonderful. Well, at least it seems that way - you're still not sure in the ending. But it's nice to throw some characters that you're not sure about in there. It gives the story a whole new level of creepy and excitement.

I would absolutely recommend this series to anyone looking for a great paranormal romance. It's got all of the elements you wish for in a romance as well as giving you some mystery and wonder about what's going to happen next. Kudos to the author - I'm impressed with this one. I will definitely be getting the third book as soon as it's available (not that we have a date yet or anything).
Check out Jessica Verday's website. I think it is really cool and has lots of stuff on there about the characters and the story.
______________________________________
Other Blog Reviews:
My Overstuffed Bookshelf
A Books Blog
Icey Books
Teens Read and Write
Harmony Book Reviews
Book Crazy
The Here. The Now. And the Books.

Great review! I love the cover for the Haunted, and the Preface is AMAZING! I haven't read The Hollow yet, but I plan on reading it soon.

Thanks for the review! I haven't read this series but it's one that I want to read. So glad the second book was even better than the first and the new characters were great.