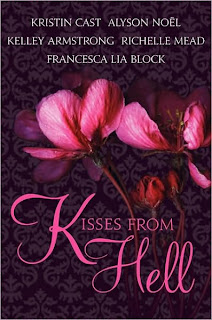 From a fugitive vampire forced to trust a boy who might work for the group bent on destroying her to the legendary romance of two immortals whose love compels them to risk everything, this heart-pounding collection brings new meaning to the words 'love you forever.' Whether you're into romances that are dark and moody or light and fun, these stories will quench that insatiable thirst for enchanting tales of the beautiful undead."
___________________________________________
First Lines:

Short story books are always so hard for me to review because I want to talk about each of the stories. I will try to do that without going too far overboard. Wish me luck!

The very first story in the book was my stand-out, absolute favorite. This could have something to do with my love of the Vampire Academy series. Richelle Mead set this story years before the first of the VA books. It's the story of how two people come together and the lengths they go to get there. It's a great story - enough that I wish for more pre-VA stories to come around. I know there's more to be had :). It's a wonderful romance and I really wished to have more of it. But that was the only problem - too darn short. Ah well.

The second story in the book is from Alyson Noel - Bring Me to Life. Don't ask me why, but there's something about this story that reminds me of The Picture of Dorian Gray by Wilde. It's about a girl who is accepted to an art school in England. It becomes quite the mystery because none of the other students show up and she's left in a gothic mansion with nothing but strange servants around. I'm not gonna give it away, but there was a bit of a twist at the end that I really didn't expect. It was a really good one-off story.

Okay. So, the next story was super confusing for me. It was the story by Kristin Cast called Above. It was.... strange. I mean, honestly I had no idea what was really going on. I mean, I got it and all... sorta... but it sure didn't make me wish for more. In fact, it made me wonder if I should just stop after the first chapter. I feel kinda bad about not liking this story because I'm such a fan of the House of Night series. But man, not good. At least, that's my take on it.

Another story based on a series she's already written is the one called Hunting Kat by Kelley Armstrong. She includes the same experimenting company and situations, but with new characters. It's an action-packed story with lots to offer. I could totally see a whole new branch of books off of this one story. I really liked it and I always look forward to more from her.

And last, but not least... the story from Francesca Lia Block called Lilith. I was surprised that this story was only about 20 pages long. I was expecting more, I suppose. The way that it was written was a bit different - not a whole lot of dialogue. There's lots of character development in very little space. But with the length, I didn't get involved enough to care in the end. But I think it's a good start. It's been a while since I've read any of her stuff.

I've been curious about this one, so thanks for the (great) review! The stories by Richelle Mead and Kelly Armstrong both sound great, but I'm sad to hear that one half of the book wasn't as great as the other one.