The Twin's Daughter by Lauren Baratz-Logsted 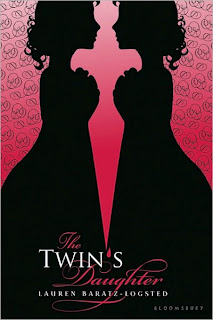 Summary:
"Lucy Sexton is stunned when a disheveled woman appears at the door one day... a woman who bears an uncanny resemblance to her own beautiful mother. The two women are identical twins, separated at birth and raised in dramatically different circumstances: one as a member of high society, the other in a workhouse. Lucy's mother quickly resolves to give her sister the kind of life she has never known, and the transformation in Aunt Helen is remarkable. As time goes by, Lucy herself transforms into a young woman, falling in love with a childhood friend she was once sure she hated. But in what should be a happy household, something is very, very wrong. And as Aunt Helen and Lucy's mother become ever more indistinguishable, Lucy begins to suspect that her aunt's now familiar face may mask a chilling agenda."
___________________________________________
First Lines:

A few weeks ago, I read The Education of Bet by this same author. While that one is a quick, easy read... this book was a bit more filled out. That seemed like a cute little story compared with this latest novel. There is very little that is light-hearted about this book.

I won't mention the last two sections, but I will say that the third section annoyed me the most. In retrospect, I shouldn't have gotten irritated like I did... but things just seemed so predictable! When things are super predictable, it loses a lot of its fun for me. I was a little too quick to judge in this case. I guess, in the least, I was still surprised during the fourth section - the outcome. I was surprised and really pleased how the book turned out. Enough to where now I'm thinking I actually really loved the story.

One thing that sort of bothered me was the time passing through this book. I mean, I do realize that a transformation from workhouse girl to lady social figure doesn't happen over night. There was just a bit of the... "and the year passed by..." and "where did the year go?!" stuff. I guess I was just hoping for a bit more of a creative way to do that. Perhaps there wasn't one. Another thing was some of the historical stuff that I wasn't sure was completely accurate. There were a few moments where I stopped and thought, "Now, wait a minute." I had a little of that with her other book as well.

I think this author writes great historical novels for people who are not fans of the genre. I think they are written so that anyone can get into the story. It keeps people from feeling sort of overwhelmed with another time period - you get more involved in the people and the circumstances than you do with the difference of time. It's a great way to introduce historical fiction.

/-La Femme Readers-/
A Chair, A Fireplace, & A Tea Cozy
Ramblings of a Teenage Bookworm
A Books Blog
The Neverending Shelf
The Compulsive Reader
Reading Rocks
There are lots of other reviews out there - mostly great. So I suggest you have a look at them :).