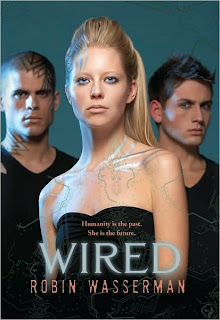 Summary:
"One year ago Lia Kahn died.
A few days later she woke up.

At least, it was supposed to.
But now everything Lia thought she knew has turned out to be a lie; everyone she thought she loved has been stolen away. And someone is trying to get rid of the mechs, once and for all.

I have reviewed the first books in this series here:
Skinned (#1)
Crashed (#2)

Okay, so if you've read my other two reviews, you know that I'm a fan of this series. And up until the ending of this story, I still was. There is a whole lot going on in this book. Lots of people coming back around, lots of memories being re-hashed, and not to mention all of the new developments.

The trilogy is a great science fiction installment for those who are fans of the Scott Westerfeld Uglies' books. I will definitely stand by that. But... this book really didn't give me the same feeling as the last two. I'm pretty sure it's all because of the ending.

/possible spoiler-age/
You spend the entire story building up the new drama - how they are going to save the mechs from the Brotherhood and the people who created them. But then... it just ends. Period. There doesn't to seem to be much of a conclusion. It is more like the story just stops. I don't know if I read it wrong or something, but it was completely unsatisfying. I was totally on board through the whole book until I realized nothing was going to happen. Just... super irritating.
/end spoiler-age/

With all that being said, there were a few things I really enjoyed about this book. A few things were tied up from the first two books - a truth revealed about Lia's download when she was killed in the car accident. It's a little shocking, but it makes this story stand out just a bit more. Very well played.

This book had a ton of potential, but it let me down in the ending. But that doesn't mean I wouldn't recommend it to anyone looking for a solid science fiction. I've been handing out the first two books to anyone who would take them. So that will be the same for this one. I am hoping there will either be another book or a companion to tie up some loose ends. But we'll see.

Eve's Fan Garden
Uhm, okay... well I couldn't find any other reviews. Perhaps more people should give this one a try. Let me know if you've reviewed it and I missed it.

I just reviewed it here: http://brookesboxofbooks.blogspot.com/2010/10/review-wired-by-robin-wasserman.html

I wasn't a huge fan of it, mostly because of the loose ends and confusing plot elements/ending!!!

I'm glad to see I wasn't the only one who found it less than steller.