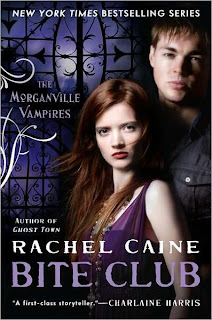 Summary:
"After learning that vampires populate Morganville - and surviving a number of adventures with her new night-dwelling friends - college student Claire Danvers has come to realize that for the most part, the undead just want to live their lives.

But someone else wants them to get ready to rumble.

There's a new extreme sport being broadcast over the Internet: bare-knuckle fights pitting captured vampires against one another - or, worse, against humans. Tracking the out-of-town signal leads Claire - accompanied by a loyal group of friends and frenemies - to discover that what began as an online brawl will soon threaten everyone in Morganville.

Check reviews of the past books in the series (The first four were pre-blog):
Glass Houses; The Dead Girls' Dance; Midnight Alley; Feast of Fools
Lord of Misrule
Carpe Corpus
Fade Out
Kiss of Death
Ghost Town

I am always leery of the covers on these books. There's something about them that is a little off-putting for me. But eventually I come to my senses and remember that I love the series. Then I'm good to go.

This tenth book (!!) in the series is about some of the local baddies creating a fight club for vamps and humans. You can imagine how that goes over. Not well. There seems to be a lot more raw emotion and bloody fighting in this book. That gives it a different feel from the other books. You also get a more in-depth look at Shane in this book. More about his life, how he views things, his damage, etc. It's nice to get another perspective a little bit.

I'm trying not to give away any spoilers, so sorry if this is a bit vague. There were a few surprises in the first couple of chapters. Namely, bringing back those characters I thought were gone. I also had forgotten how the end of the 9th book had left me in shock - it carries over and is explained more in this one.

You know, I always wonder what the author is going to come up with next. And I'm always surprised at the many story lines that are carried out in the series. I really enjoy that technology is being pulled in more and more - I mean, doesn't that seem like the logical thing to do? If you're living in a place where no one else knows it's run by vampires. You'd think info would get out there with all the tech at our disposal. Morganville has an answer for everything, though :).

Something occured to me while I was reading this book. I've been pretty involved in the series, but I just realized that this is one of the few vampire stories at the moment where the vamps are actually bad. One of my teens was complaining that vamps are all love interests now - instead of people being scared of them. Basically she thought the idea was ridiculous. I'm going to have to recommend this series to her, because the vamps are still the bad guys. Yes, there are a few lines blurred on that, but not without explanation. I think Caine does a great job showing the many sides to vamps - as in, they still have personalities and such. I guess that's a comment for the whole series, not just this book.