Top of the Feud Chain by Lisi Harrison 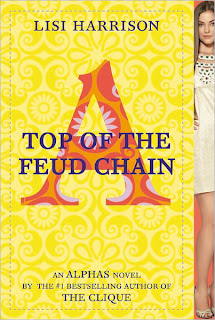 Summary:
"Eccentric billionaire Shira Brazille founded the super-exclusive Alpha Academy on exotic Alpha Island to nurture the next generation of exceptional dancers, writers, musicians, and inventors. It's a dream come true for one hundred lucky girls, but those not measuring up can be sent home at any time, for any reason. The one left standing will win worldwide fame. Who will it be?

Skye Hamilton
Is stepping up her game as Shira sheds Alpha Academy girls faster than skin from a well-pumiced foot. There's just one thing standing in her way: island bad boy Taz Brazille. Can Skye keep a dancer's poise, or will Taz throw her off the music once and for all?

Allie A. Abbott
Finally knows who she really is, and nothing is going to bring her down. Not even AJ, who just can't let go of the past. But she can Bring. It. On. Allie's come too far to be sent home without a fight.

Charlie Deery
After bouncing like a dashboard hula doll between Allie and Darwin, Charlie finally has her BFF and Brazille beau by her side. But as the competition on Alpha Island reaches its boiling point, will her drive to win make her lose what matters most?

Here are my reviews for the first three books in this series:
Alphas (#1)
Movers and Fakers (#2)
Belle of the Brawl (#3)

I honestly didn't know this was the last book in the series until I got far enough to the end to realize what was coming. I was kinda shocked to realize there wouldn't be anymore. I mean, if it hadn't ended the way it did, I could imagine tons of books set on Alpha Island. Alas...

Well, the story has built and built from the first Alphas book - you had lots of characters to follow and figure out. In this last book, you really concentrate on the three best friends who have been growing throughout the first three books. It's nice to have a more narrow view - especially when you are flipping character point of view in each chapter.

The island has been left unattended and girls are challenging each other left and right for a chance to stay on the island. Losers get kicked off. Our three leading ladies get challenged to a flight - which lands them dumped in the middle of the desert. That's one of the things that made this book a lot different from the first three. The setting is totally changed and you get a new perspective on the girls.

I promise not to give away the ending, but I will say this... I was totally surprised. I could not have even imagined where the story was going to go - and it was done perfectly. Once I started thinking about it, all the pieces fell into place and I wondered at the awesomeness of the author. :)

I will definitely be recommending this series to girls of all ages - especially now that it's a completed series. Those are an easier sell than ones that are in flux. I think anyone who loves chick lit will love these books, but you gotta start with the first one! I do hope we hear more from Alpha Island someday. I guess we'll just have to wait and see.
________________________________________
Other Blog Reviews:

I'm sure I'm completely wrong about this... but I couldn't find any reviews online! Just book seller websites. If you've read it, shoot me an email or comment and I'll add you to the list. This just means more people need to read it. So get on that!

Nice, I'd like to know the summary, though. Don't think I'm gonna get the book, unfortunately.But I really wanna read it!

Hey it's Grace from WordsLikeSilver and I read it. I posted a review here: