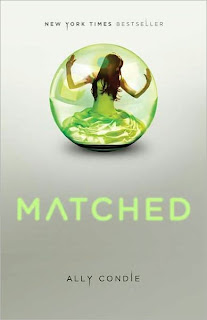 Summary:
"In the Society, Officials decide. Who you love. Where you work. When you die.

Cassia has always trusted their choices. It's barely any price to pay for a long life, the perfect job, the ideal mate. So when her best friend appears on the Matching screen, Cassia knows with complete certainty that he is the one... until she sees another face flash for an instant before the screen fades to black. Now Cassia is faced with impossible choices: between Xander and Ky, between the only life she's known and a path no one else has ever dared follow - between perfection and passion.

I've had this book in my TBR pile for ages. It was about time for me to dust it off to read. There are way too many older ARCs in my pile - I'm trying to clear them out :).

So, this book is about the future where people are given exactly the things they need to have a happy and healthy life. Exact portions of food, exact matches for marriage partners, exact amounts of exercise and leisure time... and so on. Cassia is happy with her life - until something strange happens after her Matching ceremony. Then she starts to see things in a new light.

While this is very much a dystopian novel, it's also very much about romance. Without the romantic aspect, Cassia would never have started questioning things. So that is a huge part of the story - she has to choose between two guys. And with those guys, two vastly different lives. In fact, you're not sure there actually is a choice - because if Cassia went against the wishes of the society, I have no idea what would have happened.

That was one thing I felt was a little lacking - the explanation of the Society. I do understand that they have Officials watching over them to make sure things happen the way they are supposed to. And we start to see the cracks in the system as the book goes on. But it really makes me wonder how the whole thing is set up. Hopefully this is something we get in the future books... the hierarchy... who is in charge... where did this whole Society plan come from... etc.

Even though I was wishing for more explanation, I really did enjoy this book. It's also a great story about family sticking together and being a central unit. And about friendship - but that was something else I was wishing more of. It would have been nice to get a sense of the lives of our characters before the big Matching ceremony. That would have helped me to understand the changes later on.

All in all, I think this is a very thought-inducing story that many people will love. Especially that whole dystopian aspect - it really pulls you in. And perhaps my curiosity about how the whole society works is what will keep me reading the next book in the series. I am, of course, interested to see how Cassia turns out - what happens to her. I feel a huge adventure coming... but in this unknown world, I have no idea how that will play out.

Nice review! You bring up some really good points. When I read the book, I did enjoy the world building but didn't care for the "love triangle". It felt forced. Her sudden love for Ky was not so believable though he is the catalyst for her change. I look forward to the second book too.

Great review! I liked this book a lot but I felt the same about some of the unanswered questions. The story felt unfinished. You can find my review here: http://www.fragmentsoffiction.com/2011/04/review-matched-matched-1-by-ally-condie.html