Human.4 by Mike A. Lancaster 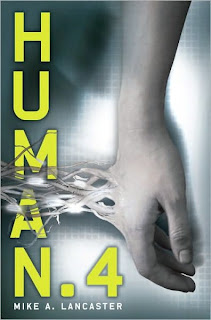 Summary:
"Kyle Straker volunteered to be hypnotized at the annual community talent show, expecting the same old lame amateur acts. But when he wakes up, his world will never be the same. Televisions and computers no longer work, but a strange language streams across their screens. Everyone's behaving oddly. It's as if Kyle doesn't exist.

Is this nightmare a result of the hypnosis? Will Kyle wake up with a snap of fingers to roars of laughter? Or is this something much more sinister?

For some reason, I thought this book was going to be about robots or something. Don't ask me why. It was just something that popped into my head and didn't let go. But it wasn't... promise. In fact, it was a lot more than I expected.

This story is about four people who are hypnotized at a small talent show in their village. When they wake up, nothing is the same. Their families are different, their friends aren't interested, it seems like everyone is after them. Something happened while they were under hypnosis and they have no idea how to figure it out. All technology is down, so the four of them have to make their own conclusions... until they run into the boy who hypnotized them.

I really am going to try not to give away the ending. You only get glimpses of what might have happened to everyone until you get close to the end of the book. I don't know that I was shocked, but it definitely wasn't the ending I was expecting. But it was so much better than my brain had made it. Very unexpected and very thought provoking.

Can you imagine what you would do if everyone you knew acted like you weren't even there? If they all became a part of something you couldn't touch? I mean, we are talking everyone. Something about that really gives me the heebie-jeebies. Kyle has three other people to help him figure things out - luckily, one of those is a semi-friend of his. The other two are adults that he didn't know much about.

There's something very cool about the way this book was written. Each section is like a recorded side of a tape - something that was recorded after this story happened. There are notes along the story to define certain terms (like... golf. and other slang terms.) that make you realize the tapes are being listened to by "superior" seeming people. There are also notes that indicate that those people have studied the tapes in order to get a sense of what life was like in the past. It's a very cool way of telling a story - one that I think goes over really well in this book.

I will definitely be recommending this book to those are who are huge sci-fi fans. It fully fits the bill there. But I think other people who like the dystopian stuff might really get into this book as well. The book was super fast - I started it at lunchtime and finished a little after dinner (and no, I didn't read the whole time). Perhaps this book hypnotized me!

I haven't heard of this book before but it sounds awesome. I'll definitely be adding it to my wish list. Thanks for sharing a great review.
Tasha @ A Trillian Books xoxo

I saw this book before, but your review is the first I read. Thanks for sharing. I will definitely give this one a try, as it seems original and different.