The Cinderella Society by Kay Cassidy 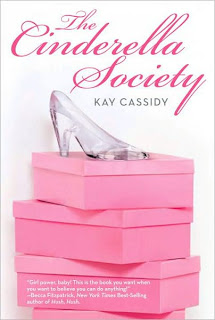 Title: The Cinderella Society Author: Kay Cassidy ISBN: 9781606840177 Publisher: Edgmont Page #: 303 Source: ARC won sometime last year. Yes, late ARC review again. Summary:
"Sixteen-year-old Jess Parker survives by staying invisible. Then she gets the chance of a lifetime: an invitation to join the Cinderella Society, a secret club of some of the most popular girls in school, where makeovers are the first order of official business. Catching the eye of her popular crush, and with a chance to finally fit in, Jess feels like she's found her fairy tale.

Until the Wickeds - led by Jess's archenemy - begin targeting innocent girls, and Jess learns that there's more to being a Cindy than reinventing yourself from the outside. She's become part of a centuries-old battle of good vs. evil, and now the Cindys need Jess on special assignment. Is honoring her new sisterhood worth destroying her dream life?"
_________________________________________
First Lines:

From the cover and title of this book, I was expecting something a little different. I was pleasantly surprised at the depth and intensity of this novel. I wasn't expecting to cheer for girl power in a book with the name Cinderella. Seriously.

The story is of a girl named Jess who moves around a lot and is constantly in a new school. Her latest school has found her with instant enemies and not enough time to find friends. At the start of her summer, she is asked to join a secret society... so, of course she thinks she's being punked. Instead, she finds herself pulled into this group of girls who are out to save the world. At least it seems that way.

It's kinda cute the way they use Cinderella wordisms. The groups of girls are Cindys. Their enemies are the Wickeds. The bad girls' boyfriends are called Villains. And the good girls' boys are called Charmings. I mean, seriously. So cute. But don't be taken in by the whole cutesy-ness of it all. The girls are just a tiny part of a larger organization that are dealing with mean girls at an almost worldly scale.

One of the messages throughout the story that I really enjoyed was the whole "be true to yourself" thing. It's very girl power. Anything against that is wicked talk. While this is definitely chick lit, the book has a lot more to offer than just boys and clothes and glittery unicorns. It's about protecting people who are weaker, learning to be positive, and fighting smart against difficult enemies. A lot more than I was expecting, but in a good way.

I think this story will be really good for all girls. Really. Who doesn't need to hear the empowering message of girls who can stand up for themselves. It almost has a message about bullying and not giving in to it. That could really help a lot of girls. Is it bad that I now have a book list going through my head on bullying to support this? Yikes.