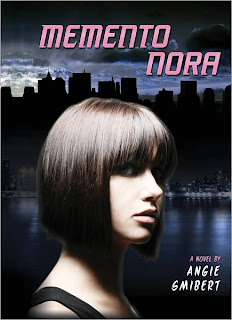 Summary:
"On an otherwise glossy day, a blast goes off and a body thuds to the ground at Nora's feet. There are terrorist attacks in the city all the time, but Nora can't forget.

In Nora's world you don't have to put up with nightmares. Nora goes with her mother to TFC - a Therapeutic Forgetting Clinic. There, she can describe her horrible memory and take a pill to erase it so she can go on like nothing ever happened. But at TFC a chance encounter with a mysterious guy changes Nora's life. She doesn't take the pill. And when Nora learns the memory her mother has chosen to forget, she realizes that someone needs to remember.

With newfound friends Micah and Winter, Nora makes a comic book of their memories called Memento. Memento is an instant hit, but it sets off a dangerous chain of events. Will Nora, Micah, and Winter be forced to take the Big Pill that will erase their memories forever?

Memento Nora is one of those books that sort of surprised me a lot. I wasn't expecting it to be as good as it was. I've read several dystopian books lately and expected this one to be more of the same. But it had a little something extra that drew me in.

This is the story of three unlikely friends who stumble upon something huge in a world of terror. Okay, so maybe one unlikely friend for the other two :). Ahem, anyway... this book is set in a world that is very similar to our own - and based on events that have happened in the last few years. It builds on that whole terrorism concept that has become part of our lives (unfortunately). The story takes terror to a place that actually makes sense - almost corporate.

I loved the whole concept of taking a pill to forget terrifying things that happen to you. People almost do that already with how many mood enhancing drugs, right? Not so far off. But it's an interesting thought - would you choose to forget about it if you could? Or would you choose to remember?

Watching the semi-friendships form is very interesting. It's not like these characters become besties for life. It's more like they share a common interest, but they are so different that they are distrusting of each other. But there are friendships like that sometimes that are even more important to you than others. I liked the tiny blooming of a romance, and I was so glad that it didn't take over. It's really only a hint of one, but it gives the story that little kick.

The ending gives you a hint of a twist - but it's really more of the characters figuring things out. You almost get there before them, but I was still a little taken aback when it was all spelled out in the story. Unfortunately, it feels a little realistic. I remember thinking that this could really happen. That people can get in this deep.

I do think that lots of different readers are going to like this book. There's a little violence and the topics are a bit heavy, so it might be better for upper middle grade to older readers. But guys, girls, all of the above will enjoy this one. Especially if they are into dystopian novels - this is a really good start (it's length helps, for sure). I did read that there is going to be a sequel, so I look forward to reading it. This book stands alone really well, so feel free to pick it up!
_______________________________________
Other Blog Reviews: