Darkness Becomes Her by Kelly Keaton 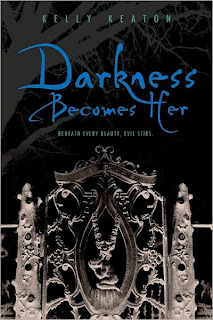 Summary:
"Ari can't help feeling lost and alone. With teal eyes and freakish silver hair that can't be changed or destroyed, Ari has always stood uot. And after growing up in foster care, she longs for some understanding of where she came from and who she is.

Her search for answers uncovers just one message from her long-dead mother: Run. Ari can sense that someone, or something, is getting too close. But it's impossible to protect herself when she doesn't know what she's running from or why she is being pursued.

She knows only one thing: She must return to her birthplace of New 2, the lush, rebuilt city of New Orleans. Upon arriving, she discovers that New 2 is very ... different. Here, Ari is seemingly normal. But every creature she encounters, no matter how deadly or horrifying, is afraid of her.

I seriously picked up this book because of the cover. Period. I just got lucky that the story was awesome. Honestly, I loved this book enough that I'm going to attempt to review without gushing. Let's see if I can do it.

This is a story set in New 2 - New Orleans after major hurricanes and the government sells the land to the nine oldest families in the city. There are rumors about the place having paranormal activity and attracts strange attention for it. One girl, Ari, is strange outside of New 2. And she goes on a search for her birth parents - having been in the system all her life. When her search leads her into New 2, she finds out some crazy things and realizes there is way more to the story.

There are so many aspects to this story that I love.
A. New Orleans. Or New 2. Whatever. I love that city. It's a magical place where I can definitely see living for the rest of forever. It's got more personality than I can even get a handle on. Not to mention that it's just beautiful. It's the perfect backdrop for an urban fantasy novel. I felt like I traveled there every time I picked up the book. Even with half the city in decay, it lends the perfect feel.

B. Mythology. You get the mythology portion about halfway through the story - but it adds a layer that you couldn't have otherwise imagined. I don't think I'm giving anything away by telling you the main goddess in this story is Athena. I think she is one of my favorite mythological characters. I do wish there had been a little more backstory on her. There seems to have been a lot of drama between her and other gods that I would have like to read about. But perhaps there will be another book or something :).

C. Romance. It was a very interesting romance from the beginning. I did wonder that they fell a little fast for each other, but perhaps that's just part of the atmosphere. Nothing is normal, everything happens fast, etc. But I loved the imagery around Sebastian. He's one of those characters I'd like to meet, you know?

I really think that people who love paranormal romances will really get into this book. Or urban fantasy. Or Horror, really. There is a serious creepy factor in this book that gave me goosebumps. So, it's good for all! Well, I will say that there is language and one scene that puts this a little older. I'd say probably 9th grade and up.