I Now Pronounce You Someone Else by Erin McCahan 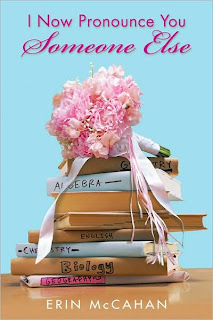 Summary:
"Eighteen-year-old Bronwen Oliver has a secret: She's really Phoebe, the lost daughter of the loving Lilywhite family. That's the only way to explain her image-obsessed mother; a kind but distant stepfather; and a brother who has a small personality complex (he thinks he's Jesus). Bronwen must have been switched at birt, and she can't wait to get away from her family for good.

I'm trying to decide if I am having a book slump with this one because the last one was so amazing, or if I really did have issues with it. Well, not issues so much... but more meh than anything else. Sorry. "Issues" is a big word. Let me explain.

This book is about a girl who is in a family that doesn't fit her at all. She has a very cool best friend who I wished to know more about. Then she meets a guy who had been a friend of her brothers previously. She and Jared hit it off... and within a year or so, he proposes. It's then about all the drama that comes along with being in high school, trying to graduate, get into college, and plan a wedding.

One thing I really liked about this book was the focus on family. I loved the whole stepfather thing - about her relationship with him and how it turns out in the end. And the family was really good for some humor relief. The grandparents are hilarious and I kinda wish to meet people like them. :) So there were some really shining characters throughout the book. They were so witty and clever, they didn't really seem believable, but they were fun nonetheless.

This book took a whole lot of time - like four years - and crunched it into 250 pages. It felt a little like that sometimes. Like things got swept past because they didn't directly relate to the relationship. I just had a hard time because I like to know more about a character's daily life than the overarching ideas of how they live. The few times we stopped and looked at her school life, I was kinda confused about people she was mentioning.

I also was not so enchanted by the romance in this one. Because you only pick up certain things (because of the timing thing), it seems super-rushed. Enough that I was thinking Bronwen was jumping into things way too quickly. Her whole wait till marriage for sex thing made me wonder if Jacob was rushing into the wedding for that reason. I dunno. It was never mentioned in that context. It just bothered me a little.

You know, all this isn't to say that I hated the book. I didn't. I had been wondering how this book would turn out, and it really didn't meet my expectations. But I did like the ending. The ending was where things started going the way that made sense. Unfortunately, the actual ending felt rushed because you took so long to get to that point in the story. Things just made more sense for me at that point.

I will probably recommend this book to girls who are looking for a cute, sappy-ish romance. There's lotsa love in the air and everything else gets pushed to the back burner. It is a really fast read, i have to give it that. But mostly because there were some family things that I wanted to see play out. I think I just realized that apart from the romance, I really liked this book. It was the relationship itself that gave me a tough time.

aww, I'm sad you didn't enjoy it as much. it does sound rushed to pack four years into 250 pages!

I've been waiting for this book to come out in Paperback to give it a go - I'm glad I waited because it sounds very short for a full priced hardback!!! -

Anyway, thanks for the review and the mention of the good and the bad.