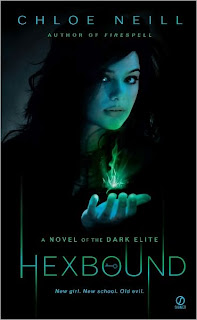 Summary:
"They say absolute power corrupts absolutely. Turns out that even a little magic can turn you to the dark side. That's why Lily has to learn how to control her newly discovered paranormal abilities, on top of avoiding the snobs who think they run her school, nursing a crush on a cute sophomore with a big werewolf-y secret, and fighting the good fight with her best friend, Scout, as they take on Chicago's nastiest nightlife - including the tainted magic users known as Reapers.

I've decided that this Dark Elite series is quickly becoming one of favorites. It's the story of a girl who was shipped off to boarding school in Chicago while her parents do some mysterious research across the globe. She finds out that she's magically inclined and becomes part of a group of "Adepts" who battle the evil magical creatures for control of the night. Basically. :)

One of the things I really like about this story is the difference of abilities for each character. No one is exactly the same. One person can do spellbinding, one can manipulate any technology, one can communicate with spirits, and so on. Everyone has something different to offer the group - making it a stronger group than if everyone had the same thing. I think that makes for an interesting story. Especially when your main character is just trying to figure out how to use hers.

I really thought I was gonna be lost on where we were in the story. I couldn't fully remember the first book, but it took me less time than I thought. It was so easy to get back into the flow of the story and the author does a great job reminding you where you've come from. The setting is so clear and visual, it makes jumping back in easy.

There are a few more relationship aspects to this book than the first one (if I remember correctly). You have some budding romances and some friendships that are turning into something else. There's some drama around these, but they are totally secondary to the main run of the book. I think that gives the story the right touch of romance without fully giving into it.

Honestly, I stayed up last night finishing this book. I realized too late that I probably shouldn't have. The author writes some things in such a spooky way, it totally freaked me out. Darn book! :) She did a great job giving descriptions of the new evil in their world - it's super gross and creepy. Doesn't help with the sleep factor though.

I Read to Relax!
The Book Smugglers
The Bibliophilic Book Blog
Books with Bite
Rex Robot Reviews
Blkosiner's Book Blog
Pure Imagination
There are so many reviews out there, I can't list all of them. But go give them a look, because it seems that most are positive. See? It's totally worth a read :).