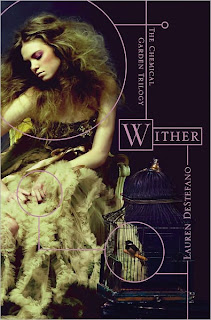 I love dystopian fiction. That's no secret. This book falls squarely in my wheelhouse of love. :) It helps that the book is really well written and a crazy-seeming concept.

This book is all about a world in which girls live to age 20 and guys to age 24. That alone is kinda mindblowing. The whole thing is that scientists from the first generation (the ones before the virus started taking lives so early) are trying to find a cure - but they are afraid the population is going to die out before they can do that. So there are many houses around the country with polygamous marriages - specifically to keep populating. The story is of a girl, Rhine, who is kidnapped to become a wife in one of these marriages.

Rhine is an amazing character. She's one that I would love to meet and talk to - her past is only hinted in pieces and you know there's so much more to it. Even if the whole book was about her previous life, I think I would have loved it. But even as it is, her story is as heartbreaking as it is hopeful. The whole situation seems so unbelievable, but I think the characters deal with it in the exact ways I would expect them to. So well done.

This is a very character driven story - despite the world that is painted around them. It's all about their stories, where they come from, and how they all work together. The whole dynamic of the "sister wives" is pretty epic. Each of them bring a different element to the marriage. And I loved their different views of the world and how things were going to turn out.

The whole story is just epic and really well done. I think anyone who is into dystopian fic will really get into this one. Hell, it's even a love story on some level - so maybe the romantics can get into that. I just think it's a wonderful story and I can't wait to put it in the hands of some of my teen readers. I do wonder that it might be more recommended for older teens because of the whole making babies bits... and having babies. It's a little graphic, but it wasn't so much that I think anyone would be offended.

Emily, I am right there with ya- I LOVE dystopian fiction! Paranormal is great and all but there is just something about a story where the whole world is messed up and crazy and having your main character realizing that something isn't right and then making the decision to follow that one, major ideal that we all take for granted... I'm in the middle of reading Delirium and it is blowing my mind haha :)

I think that creating a dystopian world really makes readers think about what life would be like if some of the most basic things that we have and enjoy were taken away (love, freedom, etc.) and I can relate to how it's pretty much heartbreaking to get into these characters' heads, and think: wow, could this really ever actually happen? Can't wait to read Wither, considering how much I am absorbed in Delirium!