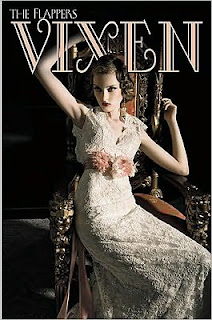 Summary:
"Every girl wants what she can't have. Seventeen-year-old Gloria Carmody wants the flapper lifestyle - and the bobbed hair, cigarettes, and music-filled nights that go with it. Now that she's engaged to Sebastian Grey, scion of one of Chicago's most powerful families, Gloria's party days are over before they've even begun ... or are they?

Clara Knowles, Gloria's goody-two-shoes cousin, has arrived to make sure the high-society wedding comes off without a hitch - but Clara isn't as lily-white as she appears. Seems she has some dirty little secrets of her own that she'll do anything to keep hidden...

Lorraine Dyer, Gloria's social-climbing best friend, is tired of living in Gloria's shadow. When Lorraine's envy spills over into desperate spite, no one is safe. And someone's going to be very sorry...

The whole time period of the twenties is so fun to read about. It's one that I haven't read many novels about, but lately there have been a couple. They shed some light (for me) on the whole atmosphere at that time and how people behaved. Not to mention that it's such a glamorous time - there's so much that could go on then.

I had a hard time not comparing this book to the recent book by Anna Godbersen (Bright Young Things). There are some serious similarities. They are both about the lives of three girls during the 1920s. Their lives are all intertwined somehow, and usually in dramatic ways. They each have their own thing going and you learn about it chapter by chapter.

Besides those similarities, I really had a good time learning about old Chicago. I haven't been there before, so it was fun to be transported there for a while. The characters are a lot of fun - even if sometimes I'm not sure if they fit in the 20s. But cool stuff about Chicago. It's a refreshing change of scenery from a lot of books these days.

There was a great emphasis on the secrecy and mystery surrounding the girls' stories. Each have a totally different outlook on the world and that really comes through. The guys that they encounter seem to be a little typical. They fit well into stereotypes - which I would have like to have seen less of. But they weren't the focus of the stories, so yeah.

I definitely think that girls looking for a fun historical fiction will have a good time with this book. Not to mention that the cover is very appealing. I spent a lot of the book trying to figure out which character she is supposed to be - because she doesn't really fit the descriptions. Either way, it's a cool cover that really catches your eye.

Hmmm... this sounds pretty interesting! I haven't come across much having to do with the 1920's time-period (besides maybe the Great Gatsby, which also captures the excessive decadence and corruption of a short-lived and reckless golden-era in history)... I'll have to check this one out- as a history nut, I love reading about those vibrant but fleeting time periods that I can really connect with and wonder-- what WOULD that have been like to live through?