The Liar Society by Lisa and Laura Roecker 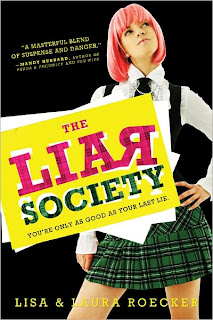 Summary:
"Since when do the dead send emails?
Kate Lowry's best friend Grace died a year ago. So when she gets an email from her, Kate's more than a little confused.

Now Kate has no choice but to prove once and for all that Grace's death was more than just a tragic accident. She teams up with a couple of knights-in-(not-so)-shining armor - the dangerously hot bad boy, Liam, and her love-struck neighbor, Seth. But at their elite private boarding school, there are secrets so big people will do anything to protect them - even if it means getting rid of anyone trying to solve a murder."
___________________________________________
First Lines:

This story was the perfect mystery that I didn't know I was waiting for. I wasn't really expecting a huge mystery, but this book does a great job pulling you into it.

You start off with the despair of a girl who lost her best friend in a fire the year before. You can see how she is dealing (or not dealing) with it and how things are turning out. Then strange things start happening - like emails from that dead best friend. And other things like people in school talking to her where before they didn't say a word.

The emails give her clues about solving the murder of her friend - as it was ruled an arson. So, she sets out to find what happened. Her neighbor, Seth (who sounds like the clingiest boy in the world) latches on to her and later helps her out. And she also starts hanging out with a boy named Liam - one of those characters who you wish you could see, really :). The three of them follow all the clues to see where they lead.

This book took me a few days to get through. But I think it was more that I liked living in this story, so I didn't rush through. It was almost like watching a movie, really. You can see the boarding school campus, you can picture her pink hair, there are lots of really cool things about this book that would make a great movie. Too bad that's not up to me :).

I thought the character of Kate was very realistic. She seemed to have the perfect balance of snarky teen and worried friend and Nancy Drew. Things didn't land in her lap that easily - and there were a few times where I thought i knew how she would react to something and I was totally wrong. She's a strong character and I think the authors did a wonderful job creating her.

There are so many twists and turns throughout the story. I started seeing all the characters as guilty - and didn't really see the ending coming. Especially how the ending was received (I know that doesn't make sense, so you'll just have to read it). I thought it wrapped up perfectly. There could have been a lot of loose ends, but I feel like everything pulls together like a perfect package.

I've used the word "perfect" too much in this review. I am aware. But I do think this is one of those mysteries that is a perfect little package for those readers who are fans of the genre. I will definitely be recommending it. I think anyone who likes realistic fic can really get into the story and see the friendships and heartbreaks for what they are. And mystery lovers will just be drooling.

Sounds really great, a blogger friend of mine is reading it and she has been telling me it's pretty good too. So I'll definitely keep it in mind.

Thanks for the review!

I so have to get this book. I read nothing but amazing reviews and I do so love a "perfect" mystery. Fab review!

I just purchased this book Friday and this post makes me really happy that I made that decision. Thanks for sharing!