Fade Out by Rachel Caine 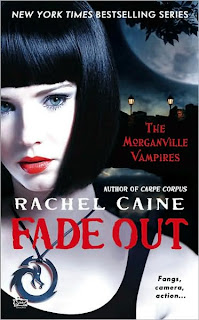 Without the evil vampire Bishop ruling over the town of Morganville, life has changed - dramatically. The resident vampires have made major concessions to the human population. With their newfound freedoms, Claire Danvers and her friends are almost starting to feel comfortable again - almost.

Now Claire can actually concentrate on her studies, and her friend Eve joins the local theater company. Yet when one of Eve's cast mates goes missing after starting work on a short documentary, Eve suspects the worst. As she and Claire investigate, they soon realize that not only is the subject of the film the vampires themselves, but that this project is a whole lot bigger - and way more dangerous - than anyone expected."
____________________________________________
Review:

The Morganville Vampires series has never steered me wrong before - and continue their streak with this book. At this point, I can't even remember what number this book is. Are we on seven yet? Ha! I was right - Amazon just told me this is the seventh book. Crazy. I wonder how many more we are going to get.

I do love how this story is more calm and less "OMG and then this happened... and then this... and you won't believe it, but this...". It was nice to have a more calm beginning to the story - where life has gone back to normal. I also enjoyed that the main enemy in the end of this one wasn't a vampire. I know this is a story all about life with vampires and such, but it's nice to be changed up every once in a while.

Usually these books tend to leave me in a cliffhanger where I'm saying "WHAT HAPPENS NEXT??!?"... but that almost wasn't the case with this one. I mean, it lacked a cliffhanger, but only in that it wasn't a huge event at the end that just cut off like it has before. There is definitely a huge event, but it concludes in this one. The thing that got me was that there were other story lines that were totally left out to dry. I know they will get picked up in the next book, but this one left me with "So, what happened with that dude?!" I guess we'll see where Book 8 takes us!

I do recommend this series to anyone loving vampire books. It's a great series and well written. So give them a shot - you won't be sorry.

A Bibliophile's Bookshelf
Late Bloomer Online
The Story Siren
Opinionated? Me?
Denise Madness Reviews
Read by Emily at 10:31 AM