I Love You, Beth Cooper by Larry Doyle 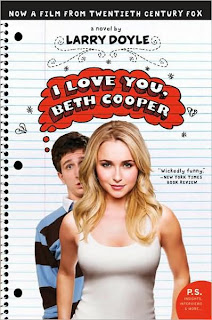 Summary:
"Denis Cooverman wanted to say something really important in his high school graduation speech. So, in front of his 512 classmates and their 3,000 relatives, he announces, "I love you, Beth Cooper."

It could have been such a sweet, memorable moment. Except that Beth, the head cheerleader, has only the vaguest idea who Denis is. And Denis, the captain of the debate team, is so far out of her league, he is barely even the same species. And then there's Kevin, Beth's remarkably large boyfriend who's in town on furlough from the United States Army. Complications ensue."
_____________________________________________
Review:

It's possible that my interest in this book came from the movie that was made a little while ago - and yes, I did read the movie tie-in version (not that it was any different inside). But I really just figured that I needed to read the book to get the reason for a movie and all that. I had only heard whisperings of the book before that came out. I still haven't seen the movie, so this is all book-based reviewing.

I do have to say that I thought it was hilarious. Like, laugh out loud hilarious. The main characters, Rich and Denis, are just insanely funny and quirky as all get out. But they are a type of awkward that is adorable and recognizable. I think these personalities lurk in every guy - just some choose not to act on their weirdness. :)

I really enjoyed that this book followed the characters for less than 24 hours. It would be insane to think that so much could happen in such little time, but on graduation night, anything goes. It also took me back to my graduation night - not that it was remotely as drama filled as this one, but it was a fun trip through memory lane.

I'd recommend this book to any of the older teens - juniors and seniors, really... just because it talks a lot about the future and who they are going to be and all that. I'm sure younger teens would totally get into it, but I think the older ones are who I will specifically recommend this to.

I couldn't find as many book reviews as I could movie reviews (and it's not looking positive), so I hope these suffice. Perhaps they've all been buried once the movie came out. Who knows.
Read by Emily at 10:50 PM