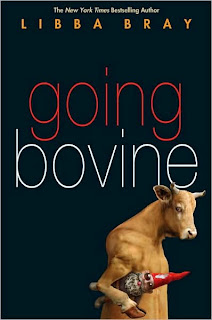 Summary:
"All sixteen-year-old Cameron wants to get through is high school - and life in general - with a minimum of effort. It's not a lot to ask. But that's before he's given some bad news: he's sick and he's going to die. Which totally sucks.

Hope arrives in the winged form of Dulcie, a loopy punk angel/possible hallucination with a bad sugar habit. She tells Cam ther is a cure - if he's willing to go in search of it. With the help of Gonzo, a death-0bsessed, video-gaming dwarf, and a yard gnome who just might be the Viking god Balder, Cam sets off on the mother of all road trips through a twisted America of smootie-drinking happiness cults (and possible serial killers), parallel-universe-hopping physicists, mythic New Orleans Jazz musicians, whacked-out television game shows, snow-globe vigilantes, and disenfranchised, fame-hungry teens into the heart of what matters most.

Libba Bray is one of those authors that I swore to read everything she ever writes. She's a wonderful writer and I've looked forward to this book coming out for a long time. This book starts out with a bang - having laugh-out-loud scenes that I ended up reading to other people as I was going along. The story is just based on something so ridiculous, but gives you a lot to think about in the end.

I do have to say that the story borders several different genre - adventure, realistic, semi-fantasy, issue-driven, humor, etc. It pretty well packs everything in there, but the story is so seamless, you barely notice. You end up just calling it a good book.

*SPOILER-ISH*
One thing I loved about this book was it's ambiguous reality. You're never fully sure if Cameron is lying in a hospital bed having delusions or if he's actually out having these insane adventures. I, for one, loved reading it as the adventure-taking Cam. But the whole thought that the entire story might not have happened is very intriguing to me. It's very well done and you continue to question straight through the end.
*/SPOILER-ISH-NESS*

The only thing I had against this book was it's length. I really don't mind a long book - sometimes being in the story longer is just what I wanted. And, honestly, most of the adventures that take place couldn't have happened if it were a shorter story. But for some reason, this book took me a while to get through. Could be because I read it through a holiday, but I dunno.

That doesn't mean it's not worth picking up! Quite the opposite. I'm going to be recommending this book to as many teens as I can give it to. Probably the older set because there's a bit of drug use and sexual content, but that definitely overtake the story. This may sound weird, but I can almost see this book being read in a high school english class. There would just be so many things to discuss. But I'll leave that up to the teachers :).
_______________________________________________
Other Blog Reviews: