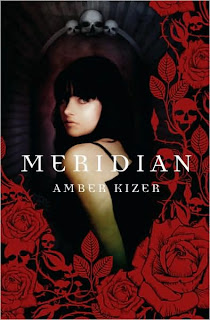 Summary:
"Half human, half angel, Meridian Sozu has a dark responsibility.

Meridian has always been an outcast. It seems that wherever she goes, death and grief follow. On her sixteenth birthday, a car crashes in front of her family's home - and though she's untouched, Meridian's body explodes in pain.

Before she can fully recover, Meridian is told that she's a danger to her family and is hustled off to her great-aunt's house in Revelation, Colorado. There she learns the secret her parents have been hiding for her entire life: Meridian is a Fenestra, the half-angel, half-human link between the living and the dead.

It's crucial that Meridian learn how to transition human souls to the afterlife - how to help people die. Only then can she help preserve the balance between good and evil on earth. But before she can do that, Meridian must come to terms with her ability, outsmart the charismatic preacher who's taken over Revelation, and maybe - if she can accept her sworn protector, Tens, for who he is - fall in love. Meridian and Tens face great danger from the Aternocti, a band of dark forces who capture vulnerable souls on the brink of death and cause chaos. But together, they have the power to outsmart evil."
_____________________________________________
Review:

I have to admit that this story was nothing like I thought it was going to be - in a really, really good way. There are lots of YA books that are sort of formulaic (even fantasy!). But this book struck me as very original from the start and kept me on the edge of my proverbial seat. None of the twists were terribly expected (part of the ending was, a little) and I really felt like I was living the story.

I was so excited to go to Amber Kizer's website and realize there is going to be a sequel to this book! This book could really stand alone, but I'm just happy to know that I can go back to this world in the coming story. There are so many directions it could go! I'm pretty pumped to see where it goes.

One of the things I really wasn't expecting was the lack of mentioning "angels." The summary inside the book talks about half-angels and all that, but the story itself really didn't use that terminology. The focus words of the story were more Fenestras and Protectors. I was expecting something else when I hear angels, but this story exceded what I had been looking for.