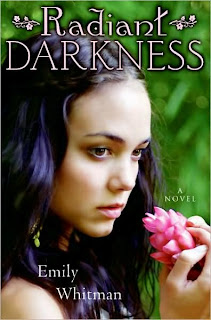 Summary:
"Persephone lives in the most gorgeous place in the world. But her mother's a goddess, as overprotective as she is powerful. Paradise has become a trap. Just when Persephone feels there's no chance of escaping the life that's been planned for her, a mysterious stranger arrives. A stranger who promises something more - something dangerous and exciting - something that spurs Persephone to make a daring choice. A choice that could destroy all she's come to love, even the earth itself.

I've really gotten into the genre of retold stories, but up until now they've all been fairy tales. As a kid, I loved all things mythology. And I've read the stories that include mythological characters... but never a retold story from mythology! I thought this was the perfect intro to that genre I could have found. Are there even any others?

This story is so well written - as the story is written about the earth and plants and gardens... It's a sensual story in that way. There are some wonderful descriptions that make you wish you were experiencing them as well. I'm ready to move in to the vale! :).

One thing that I'm not sure I totally buy into is the description of the underworld. I guess I always pictured it in the dark, dank, spooky way that Persephone begins worrying about. But the thing is, I had a hard time realizing it as a place that someone might actually want to be. It works for the story - I mean, why else would Persephone want to stay there?! But that was all just me picturing it differently, but I really enjoyed the way it was described in the book.

This is a great book for any age reader - starting, really, with 6th or 7th grade. I think it would be interesting in a discussion about mythology in school. The more modern twist in this book would probably pull in other readers that wouldn't have been interested otherwise. By modern twist, I don't mean that it's set in a different world - it's just the attitudes and the language that are more modern. I very much tip my hat to the author on that front.