The Dead-Tossed Waves by Carrie Ryan 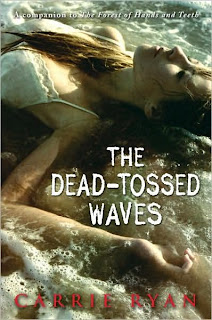 Summary:
"Gabry lives a quiet life, secure in her town next to the sea and behind the Barrier. She's content to let her friends dream of the Dark City up the coast while she watches from the top of her lighthouse. Home is all she's ever known,and all she needs for happiness.
But life after the Return is never safe, and there are threats even the Barrier can't hold back.
Gabry's mother thought she left her secrets behind in the Forest of Hands and Teeth, but like the dead in their world, secrets don't stay buried. And now, Gabry's world is crumbling.
One night beyond the Barrier...
One boy Gabry's known forever and one veiled in mystery...
One reckless moment, and half of Gabry's generation is dead, the other half imprisioned.
Gabry knows only one thing: if she is to have any hope of a future, she must face the forest of her mother's past."
___________________________________________
First lines:

I was right to have very high hopes for this book - the first one The Forest of Hands and Teeth was just amazing. I was hooked immediately and couldn't believe all that was going on in the story. When the next novel is a companion, I always have reservations about what the book is going to be like - whether it's going to live up to the original. If it's going to have the same feel to it. And this one absolutely did!

I didn't realize that it was going to take place so far in the future from the last story. It works because the world hasn't changed at all, but it was a little weird to see the original characters be so old and different. I had to wrap my head around that, but once I did, I really enjoyed getting to know these new characters.

At first I wasn't completely sold on Gabry - I really wondered about how the story could revolve around a character that was... well... weak. She sort of was a pushover and didn't seem to have a lot going for her. But the course of the story really showed how much she had grown and turned into quite the woman.

I'm wondering a little bit about the ending. Not gonna tell you what it is, but it's almost like the ending was at the start of a new-ish adventure. I really hope there's another book that's going to pick up where this one left off. I'd love to see exactly what happens from this point. I loved that this book kept the creepy-factor really high - there were times that I almost curled in a ball when I knew (or thought I did) what was coming.

This is such an amazing book - I've absolutely been recommending the first one to almost everyone who I know enjoys a great fantasy. I think really this is a great "series" for anyone interested in a solid, ya, dystopian novel.

One Librarian's Book Reviews
I Was a Teenage Book Geek
The Book Smugglers
Book Addiction
The Compulsive Reader
There's tons of reviews out there, so take a look at all of them. It's totally worth it.

I LOVED this novel! It was so amazing! This series is one of the best that I have read.

This is yet another series that I need to add to my growing TBR list!

Also wanted to let you know that I tagged you as one of my seven on the Prolific Blog Awards.