The Pack by LM Preston 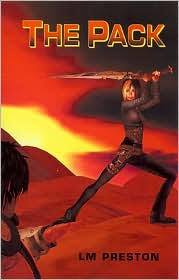 Summary:
"Shamira is considered an outcast by most, but little does anyone know that she is on a mission. Kids on Mars are disappearing, but Shamira decides to use the criminals' most unlikely weapons against them - the very kids they have captured.

I have to admit, I had reservations about reading this book at first. I had read summaries and such on it and I just wasn't completely sold on the whole concept. But after reading the story, I have to say that the ideas were really cool and the book had a story that kept me coming back.

I thought that the whole idea of the main character being a blind badass chick was really cool. I was a little disappointed when she was given her sight back within the first 75 pages. It was almost like the character got a totally new perspective and I had to change my entire perspective on her. That made the story a little rough for me - just because I was getting a handle on her character right as she changed.

This is a very action-packed story. The main character was bred to be a leader of the security force on Mars and is doing vigilante rescues because of the kidnappings. I mean, how much cooler can you get? There's tons of fighting and gadgets to keep boy readers interested. I do realize that this book is meant for teens... but I have to agree with a few other reviewers in that it's probably written for a bit younger. There are teen-ish circumstances, but the writing is really aimed at a younger reader.