Kiss of Death by Rachel Caine 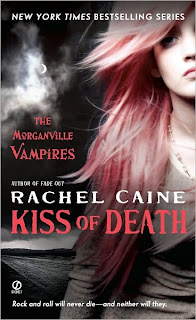 Summary:
"Vampire Michael Glass just received the call he's been waiting for all his life. His music has attracted the attention of a heavily connected music producer who wants him to cut a demo and play some dates - which means Michael will have to enter the human world.

But he won't be alone. He's been assigned an undead escort, which includes immortal enforcer Oliver, as well as Michael's human friends: rebellious Eve, oft-misunderstood Claire, and courageous Shane. And with that mix of personalities, this is going to be a roadtrip from hell.

I'm going to be honest here and say that I don't particularly look forward to the latest Morganville Vampires book - it's not a series that I sit on pins and needles waiting for. And I always end up sitting on the book for a while before I pick it up to read.

All of this doesn't mean I don't like it. I guess it's just hard for me to get jazzed up about. It's a solid story with really great and dynamic characters. There is just something very similar about each book - and they're all cut off in the middle of the story. I do understand that for the sake of having multiple volumes and such... it's just hard to jump back into as a reader.

A few things were different about this particular story. Instead of the whole thing taking place in Morganville, there are several of the characters that are granted permission to leave the city limits for a few days. I enjoyed a lot of the things that happened - mostly because they couldn't have happened in Morganville. There are a few wrenches thrown in to keep the whole thing interesting. And it does quite the job of it.

There are, of course, lots of loose ends. This story probably created a lot more questions than it answered. I will always read the next book just to see what happens. I'm definitely hooked. I will continue to hand this book to kids as well. If you haven't read any of them, here are the rest of the books in the series:
Glass Houses
The Dead Girls' Dance
Midnight Alley
Feast of Fools
Lord of Misrule
Carpe Corpus
Fade Out
Kiss of Death