Movers and Fakers by Lisi Harrison 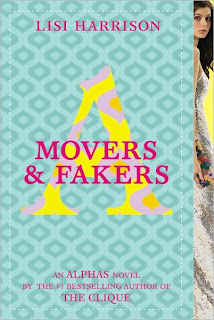 Summary:
"Eccentric billionaire Shira Brazille founded the super-exclusive Alpha Academy to nurture the next generation of exceptional dancers, writers, musicians, and inventors. It's a dream come true for one-hundred lucky girls, but those not measuring up will be sent home at any time, for any reason. The one left standing will win worldwide fame. Who will it be?

Skye Hamilton
Arrived at Alpha Academy to dance circles around the competition, but she's having a hard time feeling the beat. Her newest HAD (Hope and Dream): less stress, more fun. Now Skye's torn between what kind of Alpha she wants to be, and which uber-hawt Brazille boy she wants to be with.

Charlie Deery
Can invent practically anything - except girlfriends. But now Allie A. is warming to her, and Charlie wants to keep it that way - even if it means helping Allie A. land Darwin. But will hooking up with her ex-crush end up crushing her?

Allie A. Abbott
Is serious-leh relieved she hasn't been sent home yet, especially now that everyone knows she's more faux than a St. Tropez spray tan. Can she prove she's a true Alpha after all? Or will she go from beautiful to beta-ful?

"'Ready?' Charlie turned to her copilot in the passenger seat and shot her brows skyward, excitement twinkling in her almond-brown eyes. She still couldn't believe where they were, strapped into a Personal Alpha Plane, each zippered into a gold Alphas flight suit with an inspirational quote embroidered along the left sleeve."
Page 1
__________________________________________
Review:

I'm officially a fan of Lisi Harrison. :). I hadn't read her Clique series, but I'm absolutely hooked on this Alpha series. They are just really clever and well written - I love all of the pop culture nods... even though that makes me worry that it won't stick around for a long time.

There's something so clever about a school that is for the best of the best and it's design is all about the best people. I love that the buildings are shaped like what takes place inside... I really wish I had gone to a school like that. I think that's what I like most about it - it's a place I would LOVE to visit. Veg on the pink sand beaches :). It just paints a really cool picture in your head.

Of course, there's all the girly drama - girl likes boy, boy likes other girl, other girl dumped him already... and so on and so on. There are a few twists and turns, but it's still a soap opera. But that's what makes a great chick lit book, right? Right.

I think the language that is so specific to Harrison's writing is wonderful - very on-the-spot with how a lot of teens talk. At least, that's how they think they talk :). Or maybe.... it's the writing like it sounds thing. I don't know if that makes sense, but it's a lot of fun.

I've absolutely fallen for this series and can't wait for the next one to come out. October, I think. I definitely have been handing the first book to girls who love the whole chick lit thing and need something a little different. The setting is unique even though the issues are universal. The perfect chick lit!

I'm distressed to report that I didn't find any other reviews. Perhaps I didn't try hard enough, but more people should be reading this series! Please let me know if you've reviewed it and I missed out. Thanks!

This sounds so cute! Glad you liked it. A nice, fluffy girly book is great to read once in a while.