The Julian Game by Adele Griffin 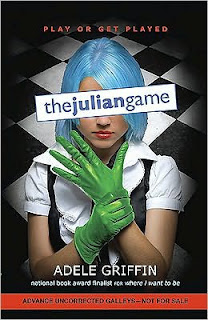 Summary:
"All new girl Raye Archer wants is a way into the in crowd, so when ice queen Ella Parker picks her to get back at her ex, the gorgeous Julian Kilgarry, Raye is more than game. Even if it means using a fake online identity as sexy blue-wigged 'Elizabeth' to reel Julian in, then secretly sabotage him. While a fun and dangerous thrill at first, Raye hadn't counted on falling for Julian herself - and igniting Ella's rage.

Now with the real-life Julian interested in her, Raye has to reconcile the temptress he fell for with her real-life self. Meanwhile, Ella is serving up her own online revenge against the traitorous Raye. Suddenly notorious, Raye has to find a way to get out of the web of deceit that she's helped to build, and get back to the relationships that matter.

Okay, so in this instance, the "first lines" teaser really didn't do anything much for the book. It gets clearer a few sentences later. But I'm not gonna go quoting the whole first page - then there wouldn't be room for a review! And we all know that's what you're waiting for. Right? Just say yes. So, on to that...

This book was so. much. fun. It's a lighthearted (for the most part) story about some trials and tribulations that are very high school oriented. I mean, who doesn't play around online and think about making fake profiles and stuff. Well, maybe I did... but that's beside the point. And this story shows just what can happen when those profiles are used for anything other than good.

I do worry about the all of the Facebook references dating this book before its time. But as for right now, it's completely relevant and will sing to anyone who has gotten into the whole online life.

One thing that I really loved was all of the quirky things about each character. They all had something to latch on to - Ella and her OCD, Natalya and her SciFi, Raye to her oversize sweatshirts... and so on. It just makes for a really cool element to the story. Getting to know all of the characters was a lot of fun. I either know people like them or would like to know people like them. I was also really happy with how the story turned out - but I'm not going to mention that here.

All in all, I thought this was a great book and will be recommending it far and wide once it's published. Definitely look for this one when August comes around - It'll be the one with the awesome cover decorating your library and bookstore shelves. I would love to see a movie of this book. Would be so cool!

So, I couldn't find any other reviews out there. I saw a lot of people waiting for this one and loving on the cover. But no reviews... have you read this one yet? I guess it is a bit early. :)

Carrie at In the Hammock Blog said...

Awesome review, I'm glad this one lives up to that amazing cover!! It probably will date itself, but sometimes that's ok, just b/c its soooo current right now!

Definitely clicked over to this review b/c of the cover... It kind of reminded me of the Lisa Yee pic that has been up at Readergirlz! But beyond that... it sounds like such a great read. Thanks for sharing your review!!

Sounds great, I'm not so fond of all the Facebook references, but the rest sounds good!
I love the the title of your blog (ninja, haha) and I'm now following!

I just WoWed this book last week! I can't wait to read it! Glad to hear that you enjoyed it and would even like to see it in film. Makes me anticipate it even more. :-)

Great review Emily! I've had this one on my TBR list and can't wait to read it, I'm even more anxious now that I've read your review, thanks for the rec!