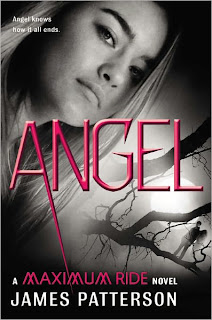 Summary:
"How do you save everything and everyone you love...
Max Ride and her best friends have always had one another's backs. No. Matter. What. Living on the edge as fugitives, they never had a choice. But now they're up against a mysterious and deadly force that's racing across the globe - and just when they need one another the most, Fang is gone. He's creating his hown gang that will replace everyone - including Max.

When you can't be together...
Max is heartbroken over losing fang, her soul mate. Her closest friend. But with Dylan ready and willing to fight by her side, she can no longer deny that his incredible intensity draws her in.

Here are the other titles in this series that I've blogged about - the rest were pre-blog:
Max (#5)
Fang (#6)

I'm definitely a fan of this series. This book was a bit different than the others because the group of friends has split up. But because of this, you end up with a whole lot of new characters with different abilities and outlooks on the world. which, for the most part, was a really good thing. It's nice to get some more characters.

The whole "saving the world" shtick comes to a head during this book. You finally get a picture of how things are going to end. I won't spoil it for you, but it's pretty epic. Especially when you imagine something happening on a huge scale - massive brainwashing. It's just intense to think about.

As always, you are left with several questions in the end. You lose a few characters on the way that are fairly important, so you know the next book is going to catch those people up. And to figure out how they are involved in the whole end of the world thing. I'm a little nervous for the fate of a few important people. :)

This whole series has been such an easy read. They take no time at all, but they are packed with action, drama, and family. Such a great story in all. I think each book standing alone needs more to it, but when you have the whole series, you've got a wonderful story.

As I've said in the past, this whole series is great for middle grade boys - and everyone else, really. I think anyone could love this story, but it seems great for those "reluctant readers." Even though the main character is a girl, I know that boys love these books. I'm always happy to suggest these books to readers - because I already know they will love them.

Reading Vacation
TeenReads.com
My Overstuffed Bookshelf
Had a hard time finding reviews on this one, but I know more people have read it. Feel free to tag your review in the comments. :)

I can't wait to read this book. I was so excited when it first came out, I just haven't had time to read it yet! Great review!