Awakened by P.C. and Kristin Cast 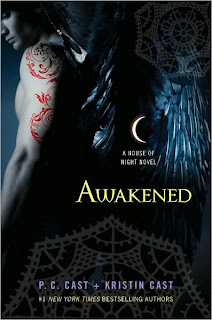 Summary:
"Exonerated by the Vampyre High Council and returned to her position of High Priestess at Tulsa's House of Night, Neferet has sworn vengeance on Zoey. Dominion over Kalona is only one of the weapons she plans to use against Z. But Zoey has found sanctuary on the Isle of Skye and is being groomed by Queen Sgiach to take over for her there. Being queen would be cool, wouldn't it? Why should she return to Tulsa? After losing her human consort, Heath, she will never be the same - and her relationship with her super-hot warrior, Stark, may never be the same either.

And what about Stevie Rae and Rephaim? The Raven Mocker refuses to be used against Stevie Rae, but what choice does he have when no one in the entire world, including Zoey, would be okay with their relationship? Does he betray his father or his heart?

First of all... the other books in this series I've reviewed: (first four pre-blog) Hunted, Tempted, Burned

Okay... so this book was... disappointing and a little too intense at parts. I've been a fan of this series in the past. But the last two books have really lost me. Not in a confused kind of way. More in a "what the hell" kinda way. Things are just getting really muddy and it's not seeming to get better.

One thing that has really gotten to me (and several other reviewers I've read) is the amount of current event references. Seriously, mentioning Glee, Tru Blood and more does not help this series in the next few years - even if those shows are still around. It's going to be really hard for them to stand the test of time with those. Not to mention alienating people who don't understand them. I didn't really get one or two of them and I felt like I missed something. It felt like there's something cop-out-ish when an author does that.

Also, I had a really hard time with the amount of dirty business that went on in this book. I mean, I get that teens are aware of sex and sexual stuff... but there are parts of this book where I really thought it was too much. Enough so that I don't want to hand it to kids younger than 16 or so. That's another way this series has kept itself from spanning a larger amount of readers. The books before this one would have been perfect for any teen looking for vamp stuff - but this one really takes it to another level.

But speaking of other levels... there are lots of life-changing things going on in this series. It's pretty much constant. But the characters don't really seem to change with them. They are still really immature-seeming. I was really hoping for some serious (new) development of our characters. They can't seem completely unaffected by the things going on around them - which is how it seems sometimes.

And I don't mean to complain about language, but there are a few words used in this (and the other) book that just make me want to throw it across the room. Namely: Bullpoopie. Really?! Come on now. Another blogger mentioned this, and I cannot agree more. Also, the light tones used at very serious times got on my nerves. I need the characters to have grown up beyond that. It's almost like the characters are trying to remind you that they're teenagers. "Hey look! We're still young! We aren't mature at all, so ignore any silliness we say!" arg.

All in all, I was disappointed. I was hoping for more from the last book - because it was so different. I thought we would head in an interesting direction. While it was interesting, it felt really forced. The whole time I was reading, I was asking myself if I would read the next one. I'm not sure of the answer, honestly. At the moment, I'm leaning toward no. But I've read so many of them - it's almost dumb to stop now.

Silent T's Book Blog (favorable review)
[a]musing reviews (LOVED this review - I wanted to copy and paste, but only because they sum up the book up so well. kudos!)
The Cajun Book Lady
Gone with the Words
Off My Bookshelf
Nocturne Romance Reads (favorable review)
Vampire Book Club