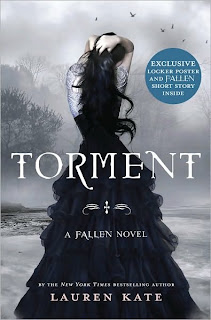 Summary:
"Hell on earth. That's what it's like for Luce to be apart from her fallen angel boyfriend, Daniel. It took them an eternity to find one another, but now he has told her he must go away. Just long enough to hunt down the Outcasts - immortals who want to kill Luce. Daniel hides Luce at Shoreline, a school on a rocky California coast with unusually gifted students: Nephilim, the offspring of fallen angels and humans.

At Shoreline, Luce learns what the Shadows are, and how she can use them as windows to her previous lives. Yet the more Luce learns, the more she suspects that Daniel hasn't told her everything. He's hiding something - something dangerous.

Before I start my review of Torment, here is my review for Fallen.

After re-reading that post, I realize that some of the things I had to say about the first one can be repeated for this book. Unfortunately, the thing to be repeated is that there are parts of this book that are very slow. Again, not boring, just took a little while to really get to the meat of the story.

This story starts out with the two enemies (Daniel and Cam) from the last book creating a truce in order to keep Luce safe. From what and why, you don't find out until really far into the story. Because Luce has no idea what's going on, you the reader will have no idea what's going on either. You start to pull the pieces together, but it doesn't come to a full picture until the very end.

Though, while Luce is trying to figure things out, there are a lot of fun, new characters introduced. I think one of my favorites is Miles. I'd like a Team Miles shirt, please. And Shelby (Luce's roommate) is a great snarky friend who doesn't sugarcoat anything. She adds a nice texture to the story. A lot of the characters from the last book make an appearance as well - I just had to figure out who everyone was :).

I had a hard time jumping into this book. I suppose it's because I couldn't easily remember the ending of Fallen. I remembered the premise and all, but not the specifics. And some of those specifics are important. But she does some explaining throughout that helps a bit.

I really think people who are into the whole paranormal romance stuff will (or already have) easily get into this series. It's very much worth your while. This second book felt a little slow and I spent a lot of time being angry with the character Daniel - I just wanted to shake some sense into him. But otherwise it's a really good book. I will definitely get excited to read the third book, Passion, later this year.
_________________________________________
Other Blog Reviews:

Literary Explorations
For What It's Worth
Novel Novice
Stiletto Storytime
A Bookworm's Haven
Chicklish
I was a Teenage Book Geek
There's a lot of reviews out there for this book because it's been out for a while. Lots of great things to read :).

Totally agree about Daniel-- I, too, wanted to shake some sense into him! He pretty much got on my nerves the whole book. Heck, I was rooting for Miles towards the end!