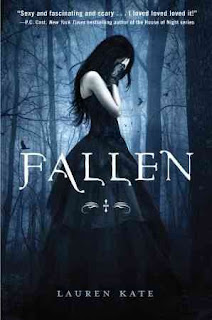 mysterious and aloof, he captures Luce Price's attention from the moment she sees him on her first day at Sword & Cross boarding school in Savannah. He's the one bright spot in a place where cell phones are forbidden, the other students are screwups, and security cameras watch every move.

I know that I'm pretty much the last person to read this book. I've been looking at the cover so long, it's almost like I had read it before I opened to the first page. There was a lot of hype around this book, so I felt like I needed to get my hands on it. I'm very glad I did!

This is another one of those paranormal romances that have the whole star crossed lovers thing going on. I'm not complaining, I'm just saying it's not a new topic. What is a little different is that the paranormal aspect is angel-focused ... not anything evil like vampires or something.

I really like all of the characters - even though my view of most of them had to change at the end of the story. I definitely wasn't expecting what happened toward the end, but don't worry... I'm not going to spoil it for you.

The one thing I wasn't a fan of was how long it took to get into the meat of the story. I do understand that with these books that are already slated to be a series, the first book tends to do a lot of the set up and explaining for the rest of the series. The problem with that is there are plenty of spots where it droops a little.

I'm not saying any part of this book was boring or anything... I'm just saying it felt a little slow at some spots. And the big, exciting, interesting stuff didn't come until almost the end of the book. Again, I know this is going to be a series, so that's why. I will definitely be picking up the next book in the series - called Torment and coming out in September (2010). My guess is that it's going to be packed with action and battles and other wonderful things.

Even with all that said about it being the first book, I will definitely be handing this book to a lot of people (as though they haven't read it already). It's a great book that fits into that paranormal romance genre that everyone is so hyped about right now. So it's a great book for that and I know they will love it.

I just finished this book this week so you weren't the last person to read it! I had a lot of the same feelings that you did. The first half of the story moved very slow for me but the action did pick up later. I will probably read the next book to see where the series goes. Great review!