Teaser Tuesday is hosted by Miz B at Should Be Reading! Here's what I've been reading the past few days:
The Otherworldlies by Jennifer Anne Kogler 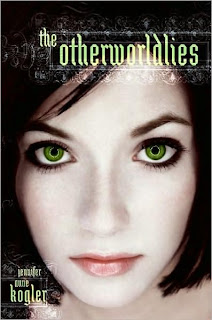 "Her mother said simply, 'I don't believe you,' and nothing more for the remainder of the ride home. Of course, if Mary Lou McAllister had realized that Fern was just as traumatized by the day's events as she herself was, she might have been a little easier on her only dauughter."
Page 34
This book is starting to get really good. The lines I chose were from near the beginning - before you really get a handle on what's going on in the story. But it's pretty telling about the mother character in the story (also known as "The Commander").
I'll let ya know how it turns out! :)
Read by Emily at 10:21 AM

Here's my teaser at arch thinking.

I'm intrigued. My teaser is from Brideshead Revisited.

Looks like a really interesting read! Excellent teaser this week :)

My teaser this week is creepy but funny! Here's a link.

Sounds rather interesting. My TT: http://www.rundpinne.com/2010/01/teaser-tuesdays-knit-purl-die.html

What doesn't she believe. I am intrigued by your teaser.

Yay, a whole face on the cover. I'm getting tired of those half faces. Good teaser! Here's mine