Witch and Wizard by James Patterson 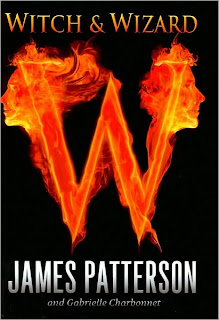 You are holding an urgent and vital narrative that reveals the forbidden truth about these perilous times...

This is the astonishing testimonial of Wisty and Whit Allgood, a sister and brother who were torn from their family in the middle of the night, slammed into prison, and accused of being a witch and wizard.

They are not alone in their terrifying predicament. Thousandds of young people have been kidnapped. Some have been accused; many others remain missing. Their fate is unknown, and the worst is feared - for the ruling regime will stop at nothing to suppress life and liberty, music and books, art and magic... and the pursuit of being a normal teenager.

There's something kinda safe and happy about any of James Patterson's YA novels. I've never read any of his adult stuff, so I can't speak for that. But when you pick up one of his books, you know pretty much how the format is going to go... how the story is going to progress... and how long it will take you (not very, I promise).

This book was no different. The writing style is the same as all his other stuff, but I really still like it. It's easy, it's to the point, it flows well... and so on. Now, just because it's written well and all that doesn't necessarily mean I loved the story.

Don't get me wrong. I did like the story... I just didn't love it. I guess the premise was interesting (seeing as I picked it up and all), but there was something that seemed to be missing. Almost like there wasn't enough explanation about things to help me know what to think about things. The extra info probably wouldn't have jived with the flow of the book, so I'm sure that would have been cut.

I was also a little overwhelmed with all of the "W" stuff. Witch, Wizard, Whit, Wisty.... It was just a bit much. All of this isn't to say that I didn't enjoy the book. I did. I think it will be great for middle grade readers - ones who just want to stick their toes into fantasy stories. But I don't think this is for the more advanced, teen reader.

Great review! Sounds like a fun book. I might check i tout if I am having a Jame Patterson day! Happy reading!

Great review and such interesting comments! I've enjoyed Patterson for years but lately some of his work is exactly the way you described. They are easy, comfortable reads but I always hope they will be more than that. I read a review of this yesterday that had all of the same points you did. They liked it but didn't love it and wanted something more.